Rep. Ken Buck, R-Colo., says despite the big tech CEOs claiming they don't censor conservative voices online, he continues to see liberal viewpoints promoted on their sites and he believes that impacts elections.

House lawmakers on Wednesday grilled the heads of some of the world's largest tech companies - with Democrats questioning whether the companies violated U.S. antitrust laws and stole from competitors, while Republicans slammed them over alleged censorship and bias against conservatives.

Facebook’s Mark Zuckerberg, Amazon’s Jeff Bezos, Sundar Pichai of Google and Apple's Tim Cook testified before the House Judiciary Antitrust Subcommittee, each telling tales they face competition not only from one another, but other large companies inside and outside the country as well.

In his opening remarks, Subcommittee Chairman David Cicilline, D-R.I, said the committee had spoken to more than 100 sources with 100s of hours talking to them about the behaviors of the marketplace, noting it's "the most bipartisan issue" in some time on Capitol Hill.

"Our founders did not bow before a king and we should now bow before the emperors of the online economy," Cicilline said.

Rep. Jim Jordan, R-Ohio, came out swinging, noting "big tech is out to get conservatives." Jordan cited several examples of alleged bias against Facebook, Google and Amazon, as well as Twitter, which was not involved in the hearing.

File photo: This combination of pictures shows the logos of the GAFA's, Google, Amazon, Facebook and Apple, displayed on a tablet in Paris, on February 18, 2019. (LIONEL BONAVENTURE/AFP/Getty Images, File)

Rep. Cicilline peppered Pichai with questions that Google was "stealing" information from other tech companies, including restaurant reviews from Yelp, or using its data in a nefarious way to spy on its competitors. Google's CEO denied the accusations, noting it, like other companies, works to provide the best experience for its customers.

Jim Sensenbrenner, R-Wis., asked Zuckerberg about censoring ideas, specifically from conservative viewpoints, including mentioning Donald Trump Jr.'s temporary ban on Twitter (which did not involve Facebook) for posting a video that claimed antimalarial drug hydroxychloroquine is a cure for COVID-19, a virus for which there is no known cure.

"Frankly, I think we've distinguished ourselves as one that defends freedom of expression the most," Zuckerberg replied, adding Facebook bans categories of harm such as terrorist propaganda, child exploitation, intellectual privacy violations and things like hate speech.

Later in the hearing, Jordan pressed Google's Pichai to promise that the company would not censor conservative voices on its search engine and would refrain from helping the Democrats' presumptive presidential nominee Joe Biden win November's election. Jordan claimed Google employees worked to help Hillary Clinton's campaign in 2016 when she was the nominee. 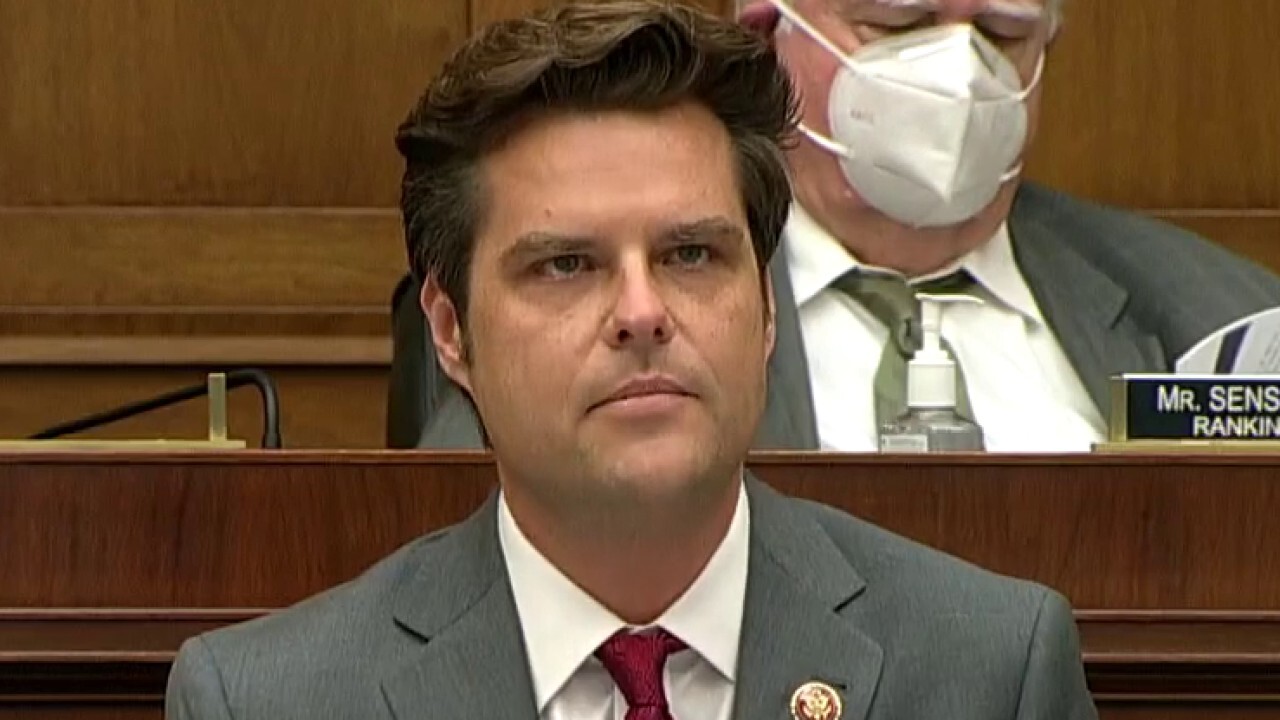 Pichai argued that the tech giant complied with all federal laws in 2016 and will continue to do so.

"We engage with campaigns according to law and approach our work in a nonpartisan way," he said. "Any work we do around the elections is nonpartisan."

He added: "You have my commitment."

Rep. Jamie Raskin, D-Md., wondered whether Facebook could do more to protect against social and gender discrimination on its platforms. Zuckerberg said the company has taken several steps, including investing in artificial intelligence, fighting against hate speech.

In recent weeks, several large advertisers have boycotted advertising on Facebook, including Unilever, Disney and others.

Rep. Hank Johnson, D-Ga., asked Cook about Apple's App Store policies, questioning whether Apple is wielding "an enormous amount of developer at the expense of app developers." He prodded Cook on whether Apple treats all app developers equally, which Cook said they did.

The CEOs were testifying as the House panel was capping its yearlong investigation into market dominance in the industry.

In his testimony, Bezos, who had never testified in front of Congress before, described Amazon as an American success story, having been founded 26 years ago “with the long-term mission of making it Earth’s most customer-centric company,” according to his opening statement.

“It’s not a coincidence that Amazon was born in this country,” Bezos' prepared statement read. “More than any other place on Earth, new companies can start, grow, and thrive here in the U.S. Our country embraces resourcefulness and self-reliance, and it embraces builders who start from scratch.”

Meanwhile, Facebook’s Zuckerberg said social media, which Americans are increasingly wary of, is part of an industry that has changed the world. “We face intense competition globally and we only succeed when we build things people find valuable,” Zuckerberg said according to a witness statement on the subcommittee's website. “I’m proud that we stand for American values like giving every person a voice and expanding access to opportunity.”

In his opening remarks, Pichai mentioned the impact of the coronavirus pandemic, noting nearly one-third of small businesses said that without business tools, they would have had to have closed.

In his opening remarks, Cook defended the App Store, noting it's responsible for 1.9 million jobs and $138 billion in 2019 commerce. Cook added that of the 1.7 million apps in the App Store, just 60 of them are made by Apple.

President Trump weighed in on the matter, tweeting he would take action against the big tech companies if Congress did not do so.

It is presently unclear what actions Trump himself could take against the group. The White House did not immediately return a request for comment from Fox News.

The hearing provided some insight into the 15 members of Congress, who may create legislation or recommendations that could include new competition laws or potentially breaking up the tech giants.

MORE THAN 1,600 GOOGLE EMPLOYEES CALL ON COMPANY TO END ALL POLICE CONTRACTS

Cicilline has called the four companies monopolies. In 2019, he called on the FTC to investigate Facebook. “Given all that we’ve learned recently about Facebook’s predatory behavior, it’s clear that serious enforcement is long overdue,” he said in a statement.

Cicilline, who has investigated the companies for nearly 13 months, believed breaking the Big Tech companies up should be a last resort, The Associated Press reported.

Most Americans have said social media companies had too much power and influence in politics, according to a recent survey by the Pew Research Center.

Concerns about anti-trust violations have cropped up among the four companies. Combined, the four accounted for more than $770 billion in 2019 revenue, including $260.1 billion for Apple and $280.5 billion for Amazon, the two largest companies by market cap.

Amazon is expected to account for 38 percent of U.S. e-commerce sales and 5.5 percent of total U.S. retail sales in 2020, according to research firm eMarketer. Of that, 41.1 percent comes directly from Amazon and 58.9 percent is from Amazon Marketplace, Amazon's third-party business, which allows other sellers to use the company's platform to sell goods.

Google and Facebook (including Facebook-owned Instagram) are the two biggest digital advertisers, combined for more than 80 percent of all digital ad spending. However, Google is expected to show a drop in revenue share, declining from 31.6 percent in 2019, largely "driven by a COVID-related pullback in travel industry ad spending," eMarketer added.

Amazon, which has only been generating ad revenue for a few years, accounts for 9.5 percent of the U.S. digital ad market, expected to rise to 10 percent in 2021, eMarketer said.

However, there was concern that the hearings were little more than political theater, with some, including independent think tank Information Technology and Innovation Foundation (ITIF), wondering what lawmaker's true intentions are.

"It’s important to step back and remember that these companies create enormous value for hundreds of millions of users and small businesses and that the United States does not lack adequate antitrust policy to address any legitimate concerns if they abuse their market power," ITIF President Robert D. Atkinson said in a statement obtained by Fox News. "Congress shouldn’t twist antitrust law to launch an ill-defined broadside on Internet platforms as a class."

"Monopolists traditionally try to boost profits by reducing supply," Atkinson added. "These companies aggressively innovate in an effort to attract and retain users with new and better products and services at low cost. This is exactly how markets should act. To punish these companies for their success would be to risk killing the proverbial geese that lay the U.S. economy’s golden eggs, which would only empower China and other foreign competitors while limiting a powerful business model for other industries in the future."