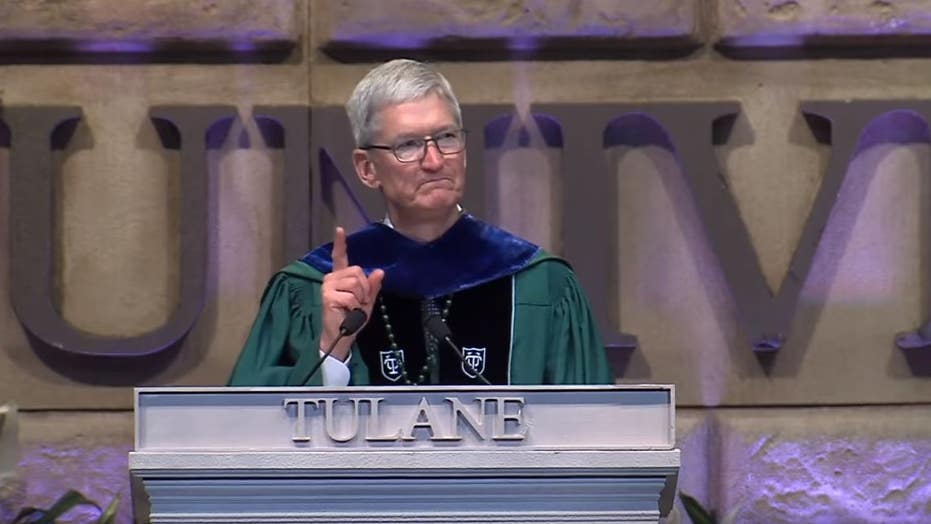 Apple CEO Tim Cook told graduating students at Tulane University that it was their job to remake the world and leave it better for humanity — while also throwing some shade at Facebook.

Cook, who grew up in Robertsdale, Ala., which is about an hour's drive from New Orleans, told the assembled class of 2019 to recognize the common humanity in each other, including those you might disagree with, and pushed back against the bullying, anger and polarization that has infected America's online discourse.

"If you find yourself spending more time fighting than getting to work, stop and ask yourself who benefits from all the chaos. There are some who would like you to believe that the only way that you can be strong is by bulldozing those who disagree or never giving them a chance to say their peace in the first place. That the only way you can build your own accomplishments is by tearing down the other side," Cook said.

The tech executive, one of a tiny number of openly gay Fortune 500 CEOs, then seemed to take a swipe at Facebook — without naming any names.

"We forget sometimes that our preexisting beliefs have their own force of gravity. Today, certain algorithms pull toward you the things you already know, believe, or like, and they push away everything else. Push back! It shouldn't be this way," Cook, 58, said. "But in 2019, opening your eyes and seeing things in a new way can be a revolutionary act. Summon the courage not just to hear but to listen. Not just to act, but to act together."

During the run-up to the 2016 U.S. presidential election, Mark Zuckerberg's social network was harnessed by Russia to sow to discord and damage the candidacy of Hillary Clinton. Part of that election meddling effort was enabled by the filter bubbles that Facebook's News Feed can create for its 2.2 billion users.

The Apple chief executive also lamented his generation's failure to combat climate change, reminding graduates of the disaster that took place in 2005 when Hurricane Katrina roared ashore and inundated the city, resulting in 1,836 fatalities.

"In some important ways, my generation has failed you in this regard. We spent too much time debating.  We've been too focused on the fight and not focused enough on progress."

Cook continued: "When we talk about climate change or any issue with human costs, and there are many, I challenge you to look for those who have the most to lose and find the real, true empathy that comes from something shared. That is really what we owe one another. When you do that, the political noise dies down, and you can feel your feet firmly planted on solid ground."

The Apple CEO concluded by urging graduates to "call upon" their grit, and not be afraid of failure.

"Make it your life's work to remake the world because there is nothing more beautiful or more worthwhile than working to leave something better for humanity."