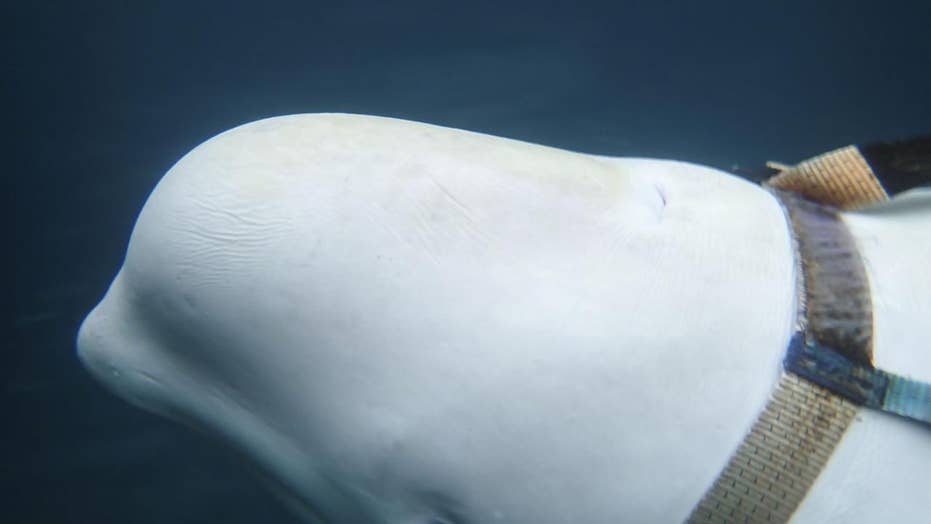 Experts say white beluga whales are potentially being used as Russian military ‘spies.’ It comes after Norwegian officials spotted a whale wearing a tight harness that appeared to be Russian made.

Man's four-legged best friend has historically played a critical role in the military machine, however, they aren’t the only animal playing a pivotal part.

"Using trained animals, other than beasts of burden for logistics purposes, has always been effective for very specific tasks in a wartime theater and evading detection by the enemy," Miguel Miranda, an expert analyst in military technology, told Fox News.

Late last month, reports emerged that Russia had sent "military dolphins" to Syria. Satellite imagery of Russia's naval base at Tartus in Syria, according to Popular Mechanics, indicated that the mammals were deployed to warden its fleet in the war-depleted nation and were likely housed in pens at the base.

Typically, dolphins can be trained to identify mines and enemy infiltrators. Their alleged use by Russia has raised questions about what other purposes mammals could serve in the theater of conflict and espionage.

In May last year, fishermen off Norway's northern coast discovered a beluga whale donning a specially-made harness reading "Equipment St. Petersburg" with Go-Pro cameras mounted to either side – prompting officials to surmise that the whale most likely came from Russian Navy equipped to aid in various missions.

A 2017 Siberian Times report underscored that Russia's Murmansk Sea Biology Research Institute had coached beluga whales, dolphins, and seals for military duties, claims denied by Russia's defense ministry. However, it was widely documented during the crest of the Cold War in the 1960s that the then-Soviet Union extensively schooled everything from beluga whales and dolphins, to sea lions and fur seals to recover lost objects and scope out hidden sea mines.

A view shows a facility, where nearly 100 whales including orcas and beluga whales are held in cages, during a visit of scientists representing explorer and founder of the Ocean Futures Society Jean-Michel Cousteau in a bay near the Sea of Japan port of Nakhodka in Primorsky Region, Russia April 7, 2019. Press Service of Administration of Primorsky Krai/Alexander Safronov/Handout via REUTERS

Three years earlier, following Russia's annexation of Crimea, it was reported that Moscow had launched a new program to tutor dolphins and seals for combat purposes and, in 2016, was offering thousands of dollars for bottlenose dolphins and scouting for ones with "perfect teeth."

Moreover, in the spring of 2000, the BBC identified a Russian man who had been tasked with training a pack of dolphins "to target enemy combat swimmers and divers with harpoons strapped to their backs, capture them, and carry mines to enemy ships in suicide attacks" during Soviet times. The dolphins could reportedly distinguish between Soviet and foreign subs by the sound of their propellers.

After funding ran out, the handler is believed to have sold the dolphins – which have a lifespan of some 50 years or so – potentially to Iran.

However, Russia is hardly the only military might that disciplines mammals – the United States armed forces have made use of the sea life dating back to the 1960s and the Vietnam War.

The U.S. Navy kept its Marine Mammal Program classified until 1992. Still ongoing out of San Diego today, the U.S. Navy utilizes the extraordinary sonar capabilities of Pacific bottlenose dolphins – which can detect better and faster than any technological gadget – as well as sea lions, who have a remarkable underwater vision to spot mines, as well as recover dormant torpedoes and test objects needed for naval exercises.

The mammals are said to have retrieved millions worth of lost instrumentation on the ocean floor and can patrol areas near nuclear-powered submarines and expose a variety of submerged threats in dark or murky waters.

Dolphins were sent to the Iraq war to assist in mine unmasking and clearance operations in the Persian Gulf to clear the way for humanitarian ships and can be deployed anywhere on the globe via a C-130 cargo aircraft, according to the U.S. Navy. It was also documented in the early days of the War on Terror that the Navy had begun cultivating dolphins to shoot possible terrorists targeting U.S. vessels – with concerning reports that some had escaped from their training ponds in Louisiana after Hurricane Katrina.

Dolphins are used by both U.S. and Russian militaries (CREDIT Robert W Boessenecker)

The U.S. Defense Department's Defense Advanced Research Projects Agency (DARPA) has also dived into the terrain. The New Scientist reported in 2016 that the agency was working to remotely control sharks via implanted electrodes in their brain, thus taking advantage of their ability to monitor underwater crafts and pursue chemical trails.

Furthermore, last year it was revealed that DARPA was experimenting with using fish as subaqueous spooks – examining whether the refined sensing practices of marine organisms could bolster national security as an extra surveillance system in a research effort dubbed Persistent Aquatic Living Sensors (PALS).

But perhaps one of the earliest pioneers in purporting to develop military mammal programs were the Brits, who employed sea lions during World War II to find mines. However, the effort was deemed a failure as the creatures were considered too slow and too easily distracted.

Birds, too, were incorporated early by the British army. Throughout World War I, the army attempted to teach seagulls to defecate on periscopes belonging to Germans, thus impairing the vision of adverse submarine crews, noted TIME Magazine.

Meanwhile, France today recruits albatrosses as a form of law enforcement – outfitting them with radar detector satellite tags in a bid to curb illegal fishing, which threatens the existence of seabirds. Scientists from France's Centre d'Etudes Biologiques de Chizé first had to develop a tracking device to enable them to audit the bird's location and surrounding vessels, thus allowing them to monitor areas otherwise challenging to regulate.

French Breitling Jet Team comprising of 7 Aero L-39 Albatross planes perform stunts during their Southeast Asian Tour aerobatics showcase on Saturday March 9, 2013 in Singapore. This is the first stop of their tour and the team will be showcasing their aerobatics performances in other countries such as the Philippines, Indonesia, Malaysia and Thailand.(AP Photo/Wong Maye-E) (AP2013)

These non-human creatures are not immune from arrest, detainment, assassination, or just the blame game either.

In the 1970s, Sudan claimed that it had captured a snooping pelican –  equipped with Israel-linked GPS technology – into its territory. In 2011, Hezbollah operatives shot down a rare Bonelli eagle it said was acting covertly for Israel, and in 2015, Hamas accused Israel of using a dolphin to spy on its movements.

COULD ARMORED VEHICLES TAKE HITS FROM ENEMY FIRE AND THEN SELF-HEAL 'TERMINATOR'-STYLE?

And in 2018, a senior Iranian military advisor, Hassan Firuzabadi, at a press conference incriminated western intelligence agencies of scheming to sneak "a variety of reptile desert species like lizards and chameleons" into the country to "find out where we have uranium mines and where we are engaged in atomic activities." Zoologists refuted this by underscoring that lizards, at least, are not able to identify uranium.

Also, in recent years, Egypt imprisoned a bird on suspicion of spying for France – later releasing it after verifying that the accessory tied to its leg was a wildlife tracker by French scientists to study migration patterns.

But on the topic of ruffling feathers, pigeons have long had a place in intelligence gathering – with historians pointing the first account of message-toting pigeons used by Noah, ensued in later years by the likes of Napoleon Bonaparte and then used as couriers for French troops in the First World War, often losing their lives on the battlefield. German forces had also taken to strapping small cameras onto the birds to collect intel through means of aerial photography during the conflict.

Pigeons fly at the Ernakulam boat jetty as state run boats start plying after lying idle for nearly two months due to the lockdown to curb the spread of coronavirus in Kochi, Kerala state, India, Wednesday, May 20, 2020. The resumption of once-routine aspects of daily life that were upended by the pandemic has picked up speed in recent weeks, as governments and communities try to strike a balance between keeping infections from flaring anew and allowing economies to function. (AP Photo/R S Iyer)

While the tactic is no longer believed to be in the U.S. playbook, Pakistan continues to accuse India of sending snitching pigeons into its borders.

"One should recall how the terror group ISIS even had its own reliable network of carrier pigeons for sending and delivering encrypted messages," Miranda noted, citing declarations by Jordanian authorities in 2016 in which the jihadists were doing such things as tying letters with phone numbers to the foot of the bird and sending it to areas outside its self-styled caliphate.

Yet the animal operations and experimentations are numerous.

In the 1940s, at the height of the Second World War, an American dentist devised a plan to leash bombs to bats in the quest to cripple Japan with fires. The National Research Defense Committee tested the endeavor using Mexican free-tailed bats but it was ultimately canned after at least one car and building were accidentally set ablaze.

And starting in the 1960s, amid the epoch of Soviet encroachment, the CIA was working to turn housecats into listening devices by having vets insert microphones in their ears and radio transmitters into their heads to send to the Kremlin. Nonetheless, the enterprise was scrapped.

The future of non-human fellows in the realm of reconnaissance, defense, national security, and surveillance remains to be seen.

But one thing remains clear among experts and analysts. Despite the jaw-dropping modern-day technological advances, animals have distinct abilities – from echolocation and intelligence to camouflage and speed – that man-made goods have yet to surpass.

GET THE FOX NEWS AP

But the next chapter may be a broader incorporation of both.

"Hybridization is an interesting trend where advances in microelectronics and materials allow companies to assemble a drone shaped like an animal – a bird, for example – or concealed with an exterior that mimics an animal's appearance that's then used for reconnaissance and surveillance purposes," Miranda added. "Remarkably, this particular field of automation and robotics is a level playing field since the Chinese and the Russians have pursued these technologies on their own with impressive results."