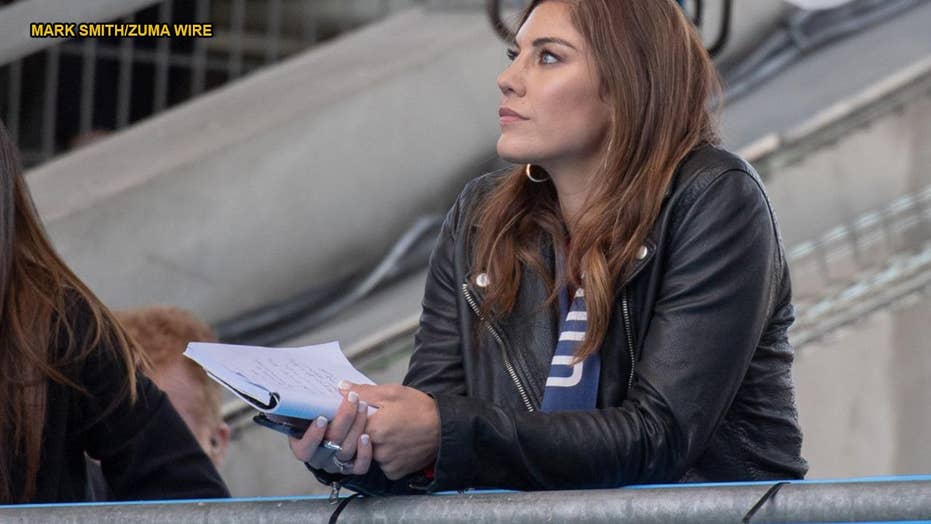 Former U.S. women's soccer team goalkeeper Hope Solo has written that her former teammates "got lucky" in Monday's 2-1 victory over Spain in the round of 16 at the Women's World Cup.

Both U.S. goals came from penalty kicks by Megan Rapinoe. The winner came in the 75th minute after Hungarian referee Katalin Kulcsar gave the Americans a penalty when Rose Lavelle went down in the box after what appeared to be minimal contact from Maria Leon. There was a lengthy delay in the match as Kulcsar reviewed her decision with the Video Assistant Referee (VAR) system before sticking with her decision to award the penalty.

“Their [The U.S.'s] second penalty was very soft – if it was a penalty at all," Solo, who is covering the tournament for the BBC, wrote in The Guardian Tuesday. "I watched the replay in the broadcasting booth over and over again, and none of us could see if Rose Lavelle was touched or not.”

Solo credited Spain for their tough play and said the squad shouldn’t have been a surprise to the U.S.

“If you’d been properly prepared and watched their recent games — and then re-watched their games," Solo wrote, "you would know that this team was going to cause the U.S. trouble, and could beat them.”

United States' Megan Rapinoe, front, celebrates with teammates after scoring the opening goal from a penalty spot during the Women's World Cup round of 16 soccer match between Spain and US at the Stade Auguste-Delaune in Reims, France, Monday, June 24, 2019. (AP Photo/Alessandra Tarantino)

With host France next up for the U.S. in Friday's quarterfinal, Solo lamented that her former team “can’t prepare anything radical for France in just three days."

“[N]o one knows what to expect – from France or the U.S.," she wrote. "The USA can’t prepare anything radical for France in just three days so on Friday they will give us what they’ve got,” she wrote.

MEGAN RAPINOE'S GOALS FROM THE SPOT GIVE US WOMEN 2-1 WIN OVER SPAIN, SET UP FRANCE MEETING

“It’s to the US’s advantage that France are coming off an emotional and exhausting game against Brazil. I’m not sure France were the better team in that game and I’m not sure they have another victory in them, even though I chose France as my favorite to win the tournament. … As the host nation, they have the weight of their country on their shoulders. We don’t yet know if that expectation is going to be an extra player for France – or the US.”

Solo has been one of the most vocal critics of the U.S. national team since her departure following the 2016 Rio Olympics. Before the tournament, Solo called coach Jill Ellis a poor leader “who cracks under pressure.”

In Tuesday's column, Solo criticized Ellis' decision to keep midfielder Lindsey Horan on the bench to start the Spain match. Horan came on as a substitute for Lavelle in the 89th minute.

"It seems Jill Ellis left Lindsey out against Spain to protect her from getting another yellow card and missing the quarter-final, but to me that was a little arrogant," she said. "Putting Lindsey on in the 89th minute seemed a little bizarre: she is either being protected or she isn’t."

The U.S. women are trying to win the World Cup for a fourth time and defend their title from 2015.