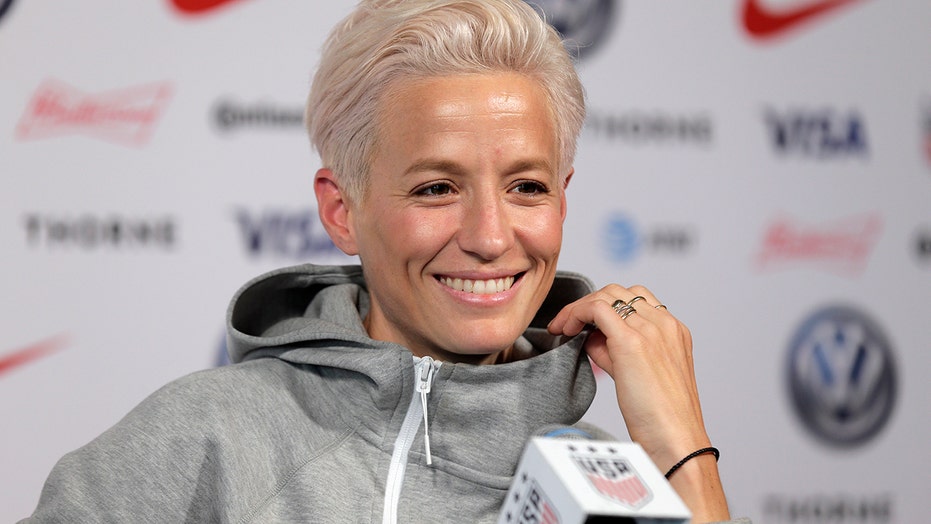 Rapinoe secured the much-anticipated matchup Monday with two goals from the spot to lift the Americans 2-1 over Spain.

“Hopefully a complete spectacle,” Rapinoe said. “Just an absolute media circus. I hope it’s huge and crazy. That’s what it should be. This is the best game, this is what everybody wanted. I think we want it. Seems like they’re up for it. [The media] of course are up for it, and all the fans. Maybe it’ll be a pretty even split between the fans in the stadium. We’ve been traveling pretty deep in this World Cup.”

She added: “I hope it’s just a total s--t show circus. It’s gonna be totally awesome. I think this is what everybody wants and these are the biggest games that you dream about as a kid.”

United States' Megan Rapinoe, center, celebrates with teammates after scoring her side's second goal from the penalty spot during the Women's World Cup round of 16 soccer match between Spain and United States at Stade Auguste-Delaune in Reims, France, Monday, June 24, 2019. (AP Photo/Thibault Camus)

Coach Jill Ellis was a bit more subdued when talking about the upcoming match.

“So many times when we play in big games, it’s actually where I get more excited,” Ellis said, according to Sports Illustrated. “So when we have our pregame meetings, it’s more. Because it means more, it matters more, there’s more at stake, and that’s why you do this. You don’t go into one, professional sports, or two, coaching, if you’re not in it for those purposes and those reasons.”

Spain’s goal in the ninth minute of the matchup was the first the U.S. allowed since April against Australia.

The U.S. and France last played on Jan. 19 in an international friendly. France got the better of the U.S., winning 3-1 at Stade Oceane Le Havre. Mallory Pugh was the only American to score in the match. Other stars like Rapinoe and Julie Ertz did not play.