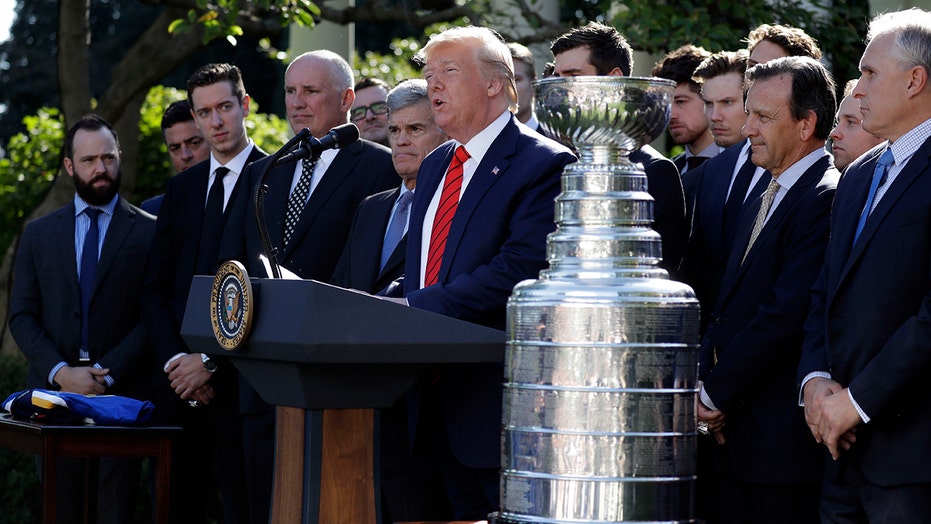 The Blues celebrated their first-ever championship in a ceremony and continued the tradition of visiting the nation’s capital instead of declining the invitation like champion players from the NBA, NFL, and MLB have done since the start of Trump’s presidency.

At the event, St. Louis’ alternate captain Alexander Steen had a closer encounter with the president than some of his teammates. Trump called over to Steen, put his arm around him and asked how he would fare in a fight against the Blues’ left-winger.

“You think I could take him in a fight?” Trump asked smiling. “I don’t know.”

Steen smiled as well and revealed a few missing teeth.

“How do mine look?” Trump asked pointing to his teeth. “No hockey.”

Talking about going to the White House, Steen said it was important for the team to stick together.

Blues owner Tom Stillman presented Trump with his own No. 45 Blues sweater and echoed Steen’s sentiments on why the team showed up to the White House.

“I think this team acts as a team in everything they do,” he said. “They stick together. By and large, (I) like to keep politics and sports separate. This is a matter of a traditional honor, being invited to the White House by the presidency. It’s something you do. I’m really proud of our group for all coming together and having a good time of it, as well.”

The Blues defeated the Boston Bruins to win the Stanley Cup in June.