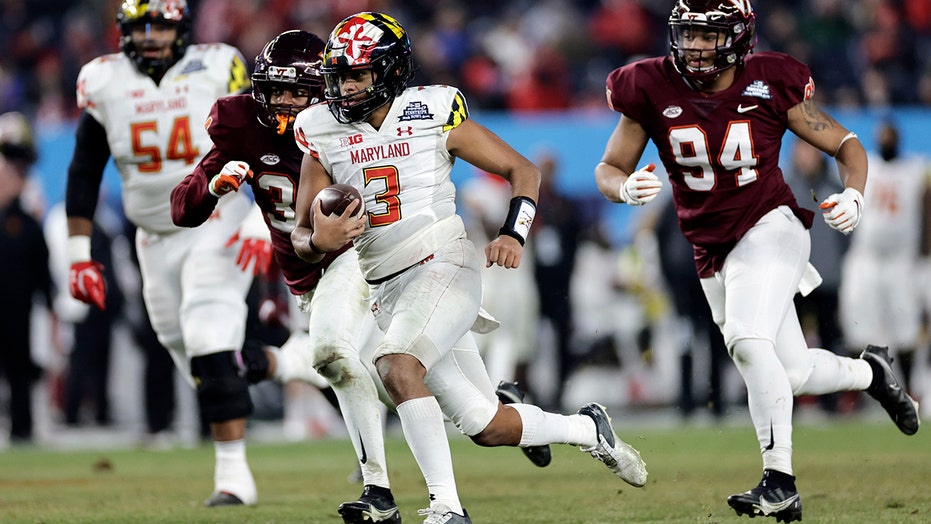 Taulia Tagovailoa raised the MVP trophy over his head as confetti fluttered around him and could only think, not of his near-flawless dominance in the Bronx, but of the words of his Maryland coach.

The best is ahead.

Tagovailoa threw touchdown passes of 70 and 32 yards to Darryl Jones, Tarheeb Still returned a punt 92 yards for a touchdown, and the sudden scores sparked Maryland to a 54-10 rout of Virginia Tech in the Pinstripe Bowl on Wednesday.

The game belonged to Tagovailoa, an Alabama transfer and the younger brother of Miami Dolphins quarterback Tua Tagovailoa. He was 20 of 24 for 265 yards, and the two TD passes brought his season total to 26, which tied Maryland's single-season record.

"I hope it quiets some of the critics and he gets some of the respect he deserves as a quarterback," coach Mike Locksley said. "We wouldn’t be in this situation we’re in with a winning season without Taulia."

Locksley preached patience in the form of his mantra, the best is ahead. Tagovailoa, who had already announced he would return to the Terps next season, showed enough flashes of greatness in New York to hint the future may be bright.

The game's MVP, Tagovailoa helped the Terrapins (7-6) get the better of the Hokies at Yankee Stadium — and even on TV.

Brent Pry was hired last month as Virginia Tech’s coach — J.C. Price served as interim coach — and went on ESPN during the game to hype the 2022 season. Pry boasted, " We are gonna play a great brand of defense. " Seconds later, Tagovailoa connected with Jones for the deep play and a 14-3 lead. Pry was good-naturedly roasted on social media, and Maryland even tweeted the clip with a grimacing face emoji.

"One game is not going to define who those guys are in the locker room," he said.

Pry must have grimaced when Tagovailoa hit Jones again in the third quarter for a 34-10 lead that helped send the Terps to their first bowl win since 2010.

Jones, a senior wide receiver, had never caught a touchdown pass over his first 40 games. He had two and finished with 111 yards receiving against the Hokies (6-7).

"I'll be telling this story for I don't know how many years," Jones said.

Antwain Littleton II added a 4-yard rushing TD for Maryland and Joseph Petrino answered the Hokies’ lone touchdown with a 44-yard field goal with 59 seconds left in the first half for a 24-10 lead. Roman Hemby scored on a 2-yard run in the third quarter.

The Hokies’ signature " Enter Sandman " song rang out before the game — the Metallica classic was usually played near the end of games at Yankee Stadium — and had fans and players jumping on another chilly Pinstripe Bowl game day.

Still silenced them moments later with the longest punt return in Maryland history, a sizzling run that finished down Virginia Tech’s sideline.

"I would have been a fool not to return it," Still said.

The Terrapins never let up, playing nothing like a team that lost six of seven in one stretch. Virginia Tech QB Connor Blumrick fumbled in the fourth quarter and Greg Rose scooped the loose ball and ran 11 yards for a touchdown and a 47-10 lead.

Coby McDonald capped the scoring with a 20-yard run that made it 54-10 and wrapped Locksley's first bowl win over seven seasons and two programs.

Five bowl games had been wiped out because of COVID-19 before the Pinstripe Bowl, and other bowls had to replace teams for the same reason. New York Yankees President Randy Levine praised Virginia Tech and Maryland for being "extraordinarily careful" with their health protocols.

"I'm happy our game didn’t get canceled. You see our team was ready," Locksley said.

The Hokies have a special bond with the Yankees following the April 16, 2007 shooting on the Virginia Tech campus that left 32 dead. The Yankees made a $1 million donation to the Hokie Spirit Memorial Fund and followed up the next season with an exhibition game against Virginia Tech on the Blacksburg campus. The Yankees wore caps in the Hokies’ orange and maroon, their "NY" emblem on the front and a "VT" logo on the side.

The Hokies returned the favor in the Pinstripe Bowl and wore the interlocking "NY" on their helmets.

The winner of the Pinstripe Bowl receives the George M. Steinbrenner Trophy.

"He’s here in spirit. This game is all about him," Levine said of the late Yankees owner.

Virginia Tech finished with its second straight losing season and has not won a bowl game since 2016 (losing four straight). Blumrick’s 3-yard run in the second quarter was the Hokies' only TD.

Tagovailoa finished tied with Scott Milanovich in 1983 for Maryland’s passing TD record. Maryland set a Pinstripe Bowl record for points since the game’s debut in 2010.

The announced attendance of 29,653 was the first time it dipped below 36,000 in 11 Pinstripe Bowl games at Yankee Stadium, although the Yankees said they were extremely pleased with the size of the crowd considering recent news regarding COVID-19.

The Hokies play their first game under Pry on Sept. 3 at Old Dominion.

Maryland is set to open Sept. 3 against Buffalo.