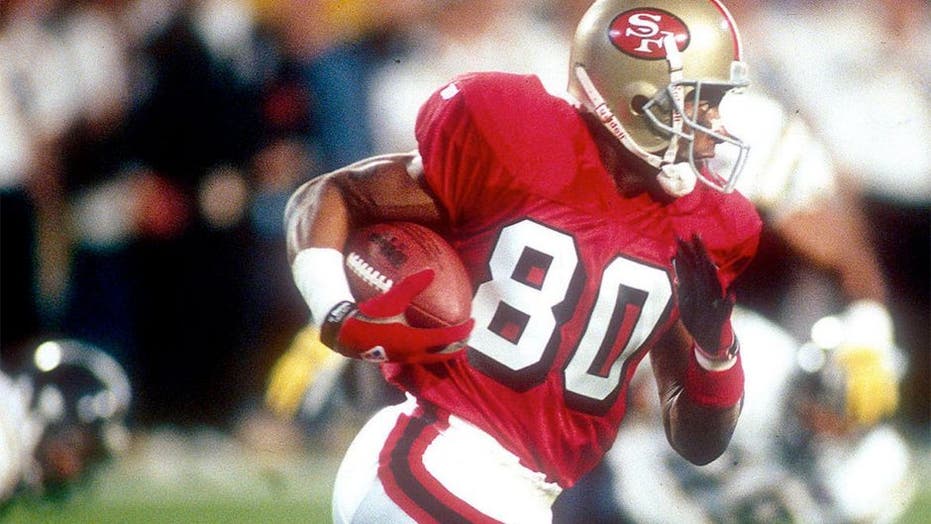 Largely considered one of the most successful teams in the NFL with five Super Bowl wins, the San Francisco 49ers spent decades falling just short of a championship title until the 1980s when the team became an unstoppable force under head coach Bill Walsh.

The 49ers were first founded in 1946 as a charter member of the All-America Football Conference. Despite going 39-15-2 in the league’s four years of existence, the 49ers were never able to surpass the dominant Cleveland Browns.

The franchise joined the NFL in 1950 where it saw several playoff appearances, including three consecutive NFC Western division titles in the early 1970s, but still no championship. That changed when new ownership took over and hired legendary coach Bill Walsh in 1977.

But who would make a Mount Rushmore of 49ers players? Take a look at the list below.

Joe Montana #16, Quarterback for the San Francisco 49ers prepares to throw a pass during the National Football Conference East game against the New York Giants on 11 September 1988 at the Giants Stadium, East Rutherford, New Jersey, United States. The 49ers won the game 20 - 17. (Photo by Allsport/Getty Images)

The best quarterback to don the Niners gold and red uniform, Joe Montana tops the list of top four players in franchise history.

The Notre Dame championship quarterback was drafted in the third round in 1979 by the 49ers, where he would go on to play as a backup for his rookie and most of his second season. Montana was able to bring San Francisco its first Super Bowl win in his first full season as starting QB.

The 49ers won three more rings under Montana, who became the first player to ever earn three Super Bowl MVPs. In his 14 seasons in San Francisco, Montana was selected for the Pro Bowl seven times and was named First-team All-Pro three times.

He was inducted into the Pro Football Hall of Fame in 2000.

Jerry Rice was one of the best players in 49ers history. (Getty Images)

Drafted by San Francisco in the midst of its most successful era, Rice helped bring home three Super Bowl titles during his 16 seasons with the 49ers.

A 13-time Pro Bowler and 10-time First-team All-Pro, Rice might just be the most decorated receiver in the league. He holds nearly every NFL record for receivers, including receptions, touchdown receptions and receiving yards.

Ronnie Lott, one of the best defensive backs in NFL history, was an immediate success in San Francisco.

An All-American out of the University of Southern California, Lott was drafted in the first round in 1981 and was a key player in helping the 49ers win the Super Bowl that season.

A four-time Super Bowl champion, 10-time Pro Bowler and eight-time First-team All-Pro, Lott was elected into the Hall of Fame in 2000.

Steve Young #8 of the San Francisco 49ers drops back to pass against the San Diego Chargers during Super Bowl XXIX on January 29, 1995 at Joe Robbie Stadium in Miami, Florida. The Niners won the Super Bowl 49-26. (Photo by Focus on Sport/Getty Images)

Steve Young spent years as Montana’s backup but when he finally took over the reins as starting quarterback in 1991, he certainly didn’t disappoint.

The seven-time Pro Bowler and three-time First-team All-Pro led San Francisco to its fifth Super Bowl in 1994 where he was also named MVP. He still holds the record for the highest quarterback passer rating of all time.