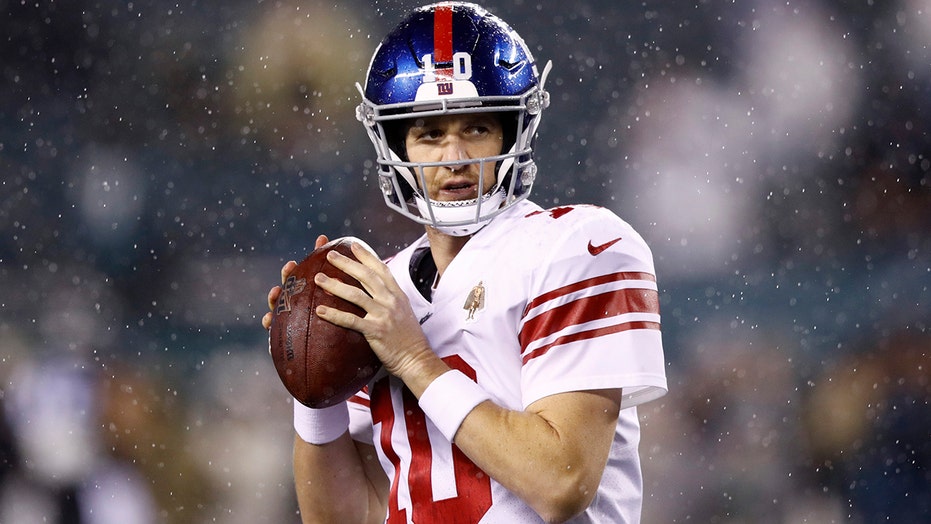 The New York Giants are one of the longest-running and most successful franchises in NFL history.

The Giants won four Super Bowls and four NFL championships since they came into existence in 1925. The Giants have retired 12 numbers and have seen 14 Hall of Famers come through the organization.

Determining who the best players in the franchise’s history are is largely up for debate. You can go with a player from yesteryear like Y.A. Tittle or you can look to players from one of their Super Bowl-winning teams.

Here’s who is on the Giants’ Mount Rushmore.

Harry Carson #53 of the New York Giants in action against the Washington Redskins during an NFL football game on October 27, 1986 at Giants Stadium in East Rutherford, New Jersey. Carson played for the Giants from 1976-88. (Photo by Focus on Sport/Getty Images)

You cannot mention the great Giants defenses of the late 1970s and 1980s without mentioning one of the players who anchored the team – Harry Carson.

The Giants selected Carson in the fourth round of the 1976 draft out of South Carolina State. He played for the Giants his entire career – 13 seasons. He was one of the best tacklers and pass rushers the team has ever seen. He won his only Super Bowl ring during the 1986 season.

Carson may have never made First-Team All-Pro, but he was selected to the Pro Bowl nine times. He was inducted into the Pro Football Hall of Fame in 2006.

Former New York Giants player Lawrence Taylor waves to the crowd prior to their game against the Indianapolis Colts at MetLife Stadium on November 3, 2014 in East Rutherford, New Jersey. (Photo by Al Bello/Getty Images)

Lawrence Taylor is arguably the best linebacker to play in the NFL ever.

The Giants selected Taylor No. 2 overall in 1981. He was in the game class as defensive backs Kenny Easley and Ronnie Lott, both of whom went on to produce Hall of Fame careers.

Taylor racked up 132.5 sacks in his career, including 20.5 in 1986. He was a 10-time Pro Bowler, an eight-time All-Pro selection and won the Defensive Player of the Year four times not to mention winning two Super Bowls. He was also one of the few defenders who have won an MVP award.

Taylor was inducted into the Hall of Fame in 1999.

He was selected in the fourth round of the 1993 draft. He quickly turned into one of the greatest defensive ends in Giants history. He set the record for most sacks in a single season in 2001 with 22.5. He finished his career with 141.5 sacks, which is good enough for sixth all-time.

Strahan finished his career with seven Pro Bowl selections, four First-Team All-Pro selections and a Defensive Player of the Year award. He helped the Giants knockoff the undefeated New England Patriots in Super Bowl XLII before calling it quits.

In this Dec. 22, 2019 file photo New York Giants quarterback Eli Manning works out prior to an NFL football game against the Washington Redskins in Landover, Md.  (AP Photo/Patrick Semansky, file)

To the outside observer, Eli Manning probably never made a difference. But to Giants fans, he was probably the most important player to come through in the organization over the last 10 years or so.

The Giants traded for Manning during the 2004 draft and he became the face of the franchise. Manning was the only quarterback in the team’s history to win two Super Bowls, beating the Patriots both times in what seemed like insurmountable odds.

Although he never led the league in any statistical passing category except for interceptions, Manning threw for 57,023 yards and 366 passing touchdowns.

Manning is not in the Hall of Fame just yet. He retired after the 2019 season. He was never an All-Pro selection but was a Pro Bowler four times.