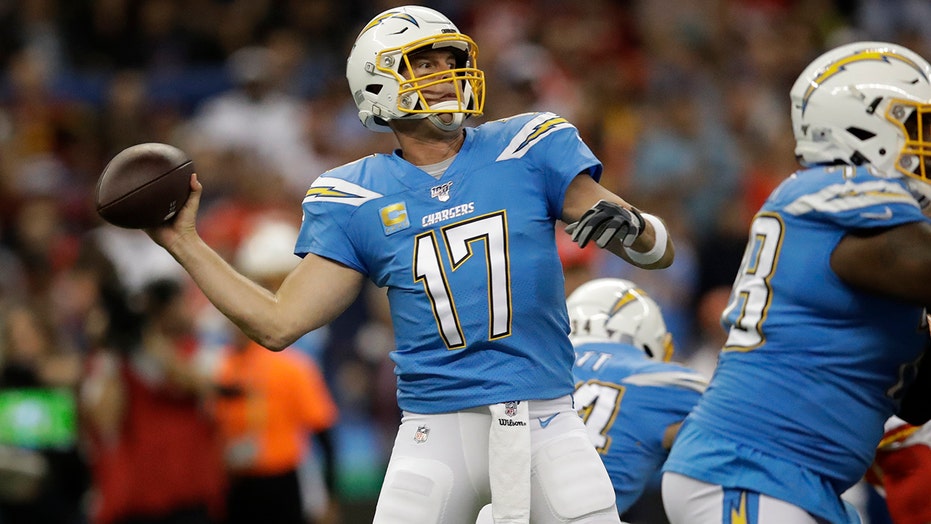 Los Angeles Chargers quarterback Philip Rivers has had plenty of fiery moments on the field and off to the sidelines during his career, but even in those heated times, he’s known for keeping things clean.

Rivers is known across the NFL for keeping his outbursts and heated exchanges G-rated and rarely cursing, if at all, most of the time, according to a lengthy ESPN profile published Monday.

Los Angeles Chargers quarterback Philip Rivers throws a pass during the first half of an NFL football game against the Kansas City Chiefs Monday, Nov. 18, 2019, in Mexico City.  (AP)

But it doesn’t mean he can’t chirp at the defensive side of the ball. Teammate Nick Hardwick told ESPN that trash-talking is a favorite pastime of Rivers during the game.

“He loves it,” said Hardwick, the team’s center. “It's like I imagine he started talking trash when he came out of the womb. It's just in him.”

“He's over there yelling at the other side,” Chow told ESPN. “And they had some really good players over there like Julius Peppers. And I'm thinking, ‘Hey, you young punk freshman -- you're going to get beat up.’ But he's yelping at them and pointing at them, guns firing. ... I don't think it was done in any harmful kind of way. I just think he enjoyed playing. And he's still that way.”

When Shawne Merriman joined the team in 2005, he told ESPN he tried to get Rivers to at least deviate to a PG-13 style of language.

“One day I almost did. I thought he dropped the F-bomb, but he didn't,” the former NFL linebacker said. “I think he said 'mother-fudge' or something.”

Merriman added: “I got under his skin, and after practice he started to imitate my walk to get back at me. And he can do my walk exactly down to a T. So I never got him to curse, but that day I almost did, and it became a running joke where if we had a great day on defense, he would start to walk like me after practice to get under my skin.”

Rivers was raised Catholic and his family said it was the way the quarterback was raised that carries him presently.

“Definitely he was taught that from the beginning,” Philip’s mother Joan told ESPN of her son’s politeness. “My family has never used bad language. ... You want to set a good example for the next generation because you're a teacher. So that's part of that as well.”

Rivers’ father, Steve, added: “He's a strong, religious Catholic and a strong person. He just tells the truth. He's not trying to hide anything, and that's worked well for him. And as far as his on-field behavior and all of that stuff, he's just having fun.”