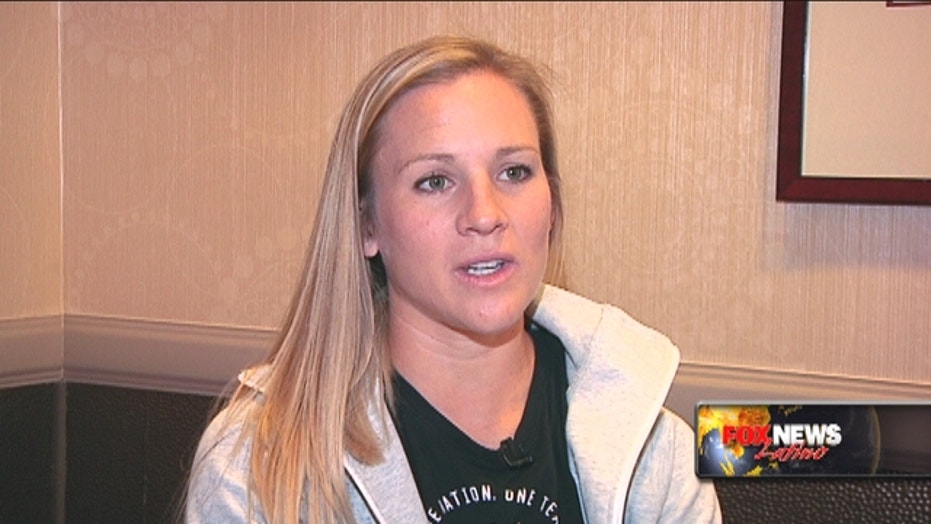 New York – Abby Wambach. Alex Morgan. Sydney Leroux. These are three names that are going to be heard throughout the Women’s World Cup tournament in Canada this summer.

They will be scoring goals as the United States fights to get back on top of the podium.

Alongside these three formidable strikers stands Amy Rodriguez, who up until earlier this summer was written off as unlikely to get a spot on coach Jill Ellis’ 23-woman roster.

The 28-year-old Rodriguez, whose father is Cuban-American, herself admits that she doubted she would get a spot on her second World Cup roster.

“I know the players that we have, and I know how good we are and I thought ‘I’m just not going to be good enough this time. I don’t think I’m going to make it,’” she told Fox News Latino recently. Team USA faces off against Australia on Monday night in its first World Cup match.

Rodriguez, a starter on the 2011 Women's World Cup team, took 2013 off from the national team to give birth to her son Ryan, then buckled down and worked hard to get her fitness back to competition level and would not take “no” for an answer.

“I wanted to leave everything on the field and not have any regrets,” she said. “For the women on this team that have done it before me – they didn’t warn me enough. It was hard.”

Working with the trainers and having a huge support team, Rodriguez crawled her way back onto the team, something that Coach Ellis only praised.

“I think her commitment to return to form and play – she worked very, very hard,” she told reporters last month. “One of the things I said to her right before qualifiers … ‘You have really special qualities. We don’t see them enough. We don’t see them for longer periods of time.’ And a lot was attributed to her commitment to raise her fitness level.”

Ellis said Rodriguez “flourished” at the right time when the strikers were plagued with injuries and it was her player’s attitude that got her a spot on the World Cup roster.

“Now I see her impacting the game for longer moments, which is exactly what we need,” Ellis added. “A-Rod has flourished, and now I have the upmost confidence in her.”

Rodriguez, who started playing soccer at a very young age and plays for FC Kansas City in the NWSL, said she is extremely proud of representing the Latino community.

"It's surprising that I'm the only Latina player on the team," she told FNL, adding that she hopes this year’s tournament will inspire other young girls in the future.

"I think it will change in the future,” she said.