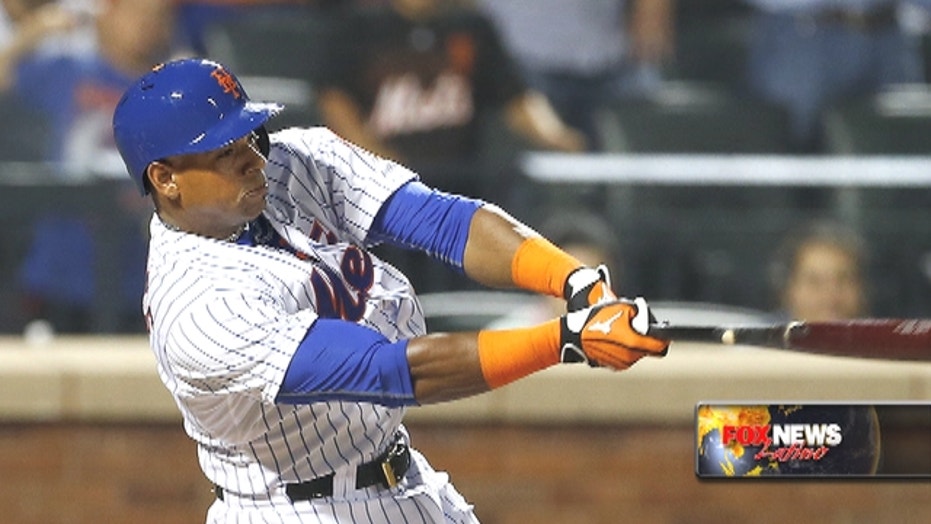 The New York Mets acquired Yoenis Céspedes hoping he would be a big hit in the middle of their lineup, and he helped them slug their way into first place.

MIAMI (AP) – The New York Mets acquired Yoenis Céspedes last week, hoping he would be a big hit in the middle of their lineup.

On Monday night, he helped them slug their way into first place.

Céspedes hit three doubles and drove in four runs, leading the Mets over the Miami Marlins 12-1 and putting them atop the NL East.

"Very nice, a good night for him," manager Terry Collins said. "That's why we got him. We got him to be that guy in the middle of the lineup who drives in those big runs."

The Mets obtained Céspedes from Detroit right before Friday's trade deadline. Playing for the third time with New York, he tied the team record for doubles in a game.

Fresh off sweeping Washington, the Mets won their fourth in a row and moved a game ahead of the Nationals for the division lead.

"It's obviously a great spot to be in at this point in time in August to say that you have yourself either in contention or on top of the division," said Curtis Granderson, who got three hits, drove in two runs and scored twice.

The Mets topped the 10 total runs they scored while sweeping three from Washington. This win, coupled with the Nationals' loss to Arizona, put the Mets in first place for the first time since June 19.

"It's always nice to be there, but we've got a lot of games to play," Collins said.

There was a brief delay with two outs in the bottom of the ninth inning after Tomas Telis lost control of his bat and it flew into the seats, hitting a fan in the neck. The man was sitting with an ice pack in a tunnel underneath the stands after the game. The Marlins said they would monitor him and expected he soon would be OK to go home.

"It was just a blur," Conforto said. "The whole trip around the bases was just a flash in my mind. It's a moment I'll never forget."

Bartolo Colon (10-10) won for the first time since June 12 after dropping his previous six decisions. He pitched eight innings, allowing one run and seven hits.

"That's a big outing for Bartolo because we need him," Collins said. "If you're going to stay in the race you've got to get outings and innings from all of your pitchers. He's struggled lately and tonight was a good outing for him."

Tom Koehler (8-8) gave up seven runs in 4 1-3 innings in the Marlins' most-lopsided loss of the season.

"Not much you can say about this game," Marlins manager Dan Jennings said. "It was ugly, the worst game we played all year."

"He was really close to hitting the ball out of the ballpark a couple times," Granderson said. "It's very impressive to get a chance to watch him swing the bat."

The last Mets player to hit three doubles in a game was Scott Hairston on Aug. 17, 2012.

Conforto homered in the second to center field for a 3-0 lead.

"That ball was crushed," Collins said.

Céspedes doubled in the sixth and scored on two wild pitches by Andre Rienzo.

Christian Yelich had three hits including an RBI double for the Marlins.