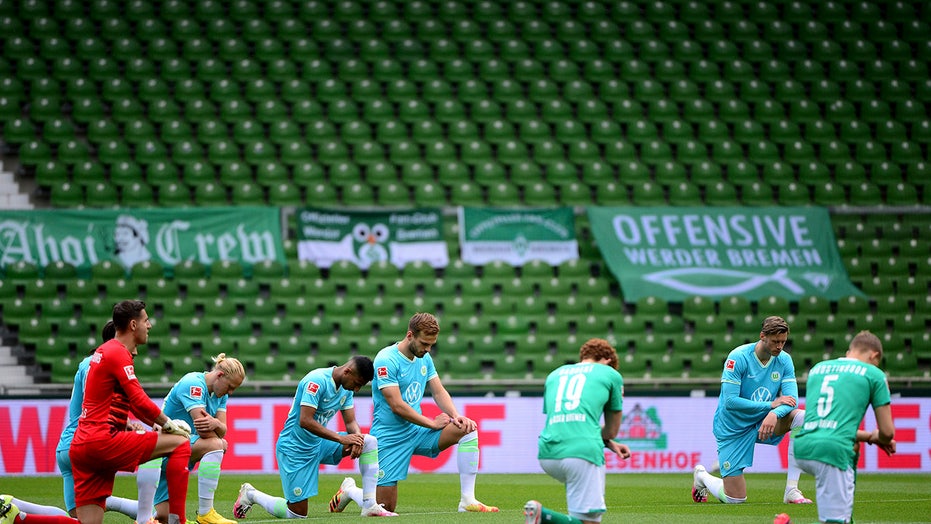 Four more Bundesliga teams took a knee before their games on Sunday, as Werder Bremen inched closer to relegation and Schalke's winless run became its worst for 27 years.

Borussia Dortmund and Hertha Berlin first kneeled ahead of their game Saturday in an anti-racism gesture following mass protests against police brutality and racism across the United States over the killing of George Floyd, a handcuffed black man, in Minneapolis on May 25.

Wolfsburg and Werder Bremen followed their example in Sunday's opening game. Union Berlin and Schalke — whose midfielder Weston McKennie was the first in Germany to protest last week — also kneeled ahead of their 1-1 draw Sunday. The referee and his assistants joined in.

Wolfsburg beat Werder 1-0 to take a step toward the Europa League while Werder moves closer to relegation from the Bundesliga.

They were heading for a largely uneventful 0-0 draw in torrential rain before the 82nd minute, when Wolfsburg’s substitute winger Felix Klaus curled in a cross from the right and Wout Weghorst met it with a bouncing header into the Werder goal.

The result leaves Werder, last a German champion in 2009, in 17th place and facing relegation. That would mean only its second season outside the top division since the Bundesliga was founded.

Werder hasn’t won at home in the league since Sept. 1. It is six points off safety and three off Fortuna Düsseldorf in the relegation playoff spot. Wolfsburg climbed above Hoffenheim into sixth place and a Europa League spot.

Union and Schalke kept their unwanted records of not having won since the league restarted amid the coronavirus pandemic. While Union was happy with a point to edge away from the relegation zone, Schalke was again frustrated as its winless run hit 12 games in all competitions, its worst since 1993.

Robert Andrich gave Union the lead on a rapid counterattack, his first goal coming with his 48th shot of the season, but Schalke answered with a powerful long-range strike from Jonjoe Kenny, the right-back on loan from Everton.

Fans are barred from Bundesliga matches because of the pandemic, but Union supporters made their voices heard at the game.

Around 30 people gathered in a forested area near the stadium Sunday, standing apart for social distancing, and police on site chose not to intervene, the dpa agency reported.

Their chants were clearly audible in the stadium and on TV, something Andrich called “really beautiful."

Cologne's Anthony Modeste thought he'd given his team its first win since the Bundesliga restart when he volleyed the ball in from the edge of the box against Augsburg in the 85th minute.