The owner of Maximum Security on Friday issued a multimillion-dollar bet to the owners of four racehorses that benefited from his horse’s disqualification in this year’s Kentucky Derby.

Gary West said he would pay $5 million apiece to the owners of Country House, War of Will, Long Range Toddy and Bodexpress if any of the thoroughbreds finish ahead of his horse in a race through the end of the year.

No horse has to win the race. They just have to cross the finish line ahead of Maximum Security. The other owners would have to put $5 million of their own money to pay West if Maximum Security finishes ahead of theirs. 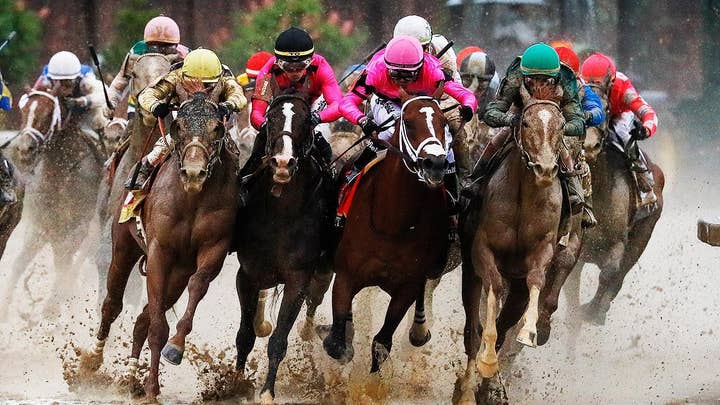 West said his challenge isn't about the controversial disqualification, but instead, to generate interest in the sport.

“I am doing this because I think it would be good for racing and a unique opportunity to bring more people into racing because of the elevated interest this would bring to the sport,” West told HorseRacingNation.com.

Any winnings would be donated to the Permanently Disabled Jockeys Fund, West said, adding that he would still make a donation even if no owners accept his challenge.

“Most experts agree that Maximum Security was the best horse in the Kentucky Derby,” West said, according to the Louisville Courier-Journal. “I don’t care to discuss the controversy surrounding the events of the race and the disqualification of my horse at this time, but I firmly believe I have the best 3-year-old in the country and I’m willing to put my money where my mouth is.”

Maximum Security initially finished first in the May 4 race, but was disqualified minutes later for interference, dashing hopes for a potential Triple Crown run. Country House, who finished second, was elevated to first place, War of Will from eighth to seventh, Bodexpress from 14th to 13th and Long Range Toddy from 17th to 16th.

Maximum Security was placed 17th. Churchill Downs stewards ruled the horse drifted into War of Will’s path and affected other horses. Luis Saez, Maximum Security's jockey, was suspended for 15 days for failing to control the horse.

Maximum Security, the horse disqualified from the Kentucky Derby horse race, is led to a grooming station after being hot walked by Edelberto Rivas after the horse's arrival at its home barn at Monmouth Park Racetrack, Tuesday, May 7, 2019, in Oceanport, N.J. (AP Photo/Julio Cortez)

A lawsuit filed by the thoroughbred owner and his wife against race stewards and the Kentucky Horse Racing Commission seeks to overturn the decision – the first on-track disqualification in the Derby’s 145-year history.

Maximum Security will not run in the Preakness Stakes on Saturday.