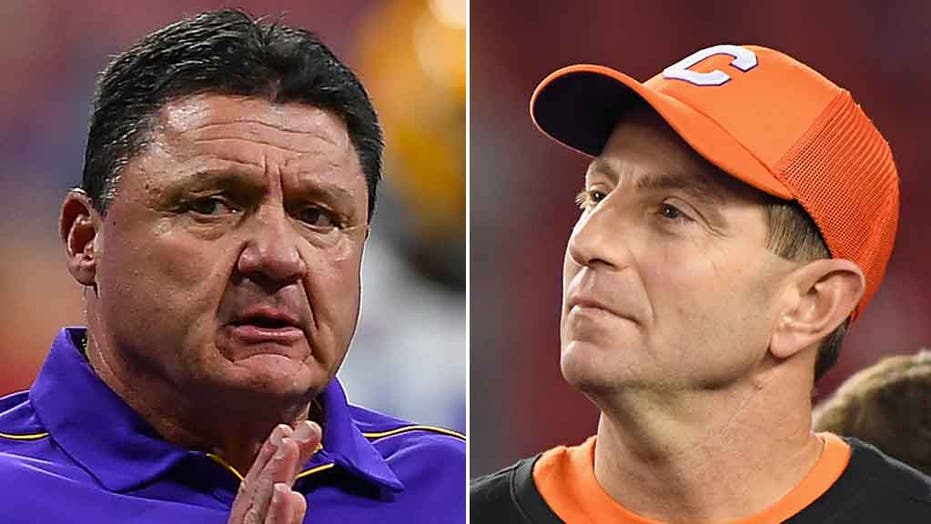 The LSU Tigers and the Clemson Tigers are the final two teams left and will duke it out for the national championship Monday at the Mercedes-Benz Superdome in New Orleans.

LSU won the SEC championship game against Georgia to solidify a spot in the College Football Playoff. The Tigers then ran over Oklahoma to make it the final game. It’s the first time the Tigers are vying for a national championship since 2012 when they lost the BCS National Championship game to Alabama.

LSU last won a national championship when Les Miles was their head coach. The Tigers defeated Ohio State, 38-24, in 2008 with Matt Flynn leading the offense.

Clemson gets back to the national championship game for the fourth time in five seasons. Clemson won the national title last year and in 2016 against Alabama. The Tigers lost to Alabama in the College Football Playoff semifinals in 2017.

Clemson comes into the game as ACC champions having defeated Virginia for the conference title. The Tigers then edged out Ohio State in the College Football Playoff semifinal and have a chance to win another national title under coach Dabo Swinney.

Both teams come into the game with high-flying offenses.

LSU is led by Heisman Trophy winner Joe Burrow, who had a remarkable season. He has 5,208 passing yards, 55 touchdown passes and only six interceptions in 14 games this season. Burrow had the LSU offense firing on all cylinders against Oklahoma, throwing seven touchdown passes in the first half.

On defense, the Tigers are led by K’Lavon Chaisson who has 6 1/2 sacks on the year and JaCoby Stevens who has five sacks on the season. Chaisson and Michael Divinity Jr. are expected to play in the national championship game. It would be the first time they both play together since October.

Clemson is led by sophomore Trevor Lawrence. He burst onto the national scene last year after he took the starting quarterback role from Kelly Bryant. His performance against Alabama in their blowout national championship role had people calling for the NFL to change its draft rules so he could go pro immediately.

Etienne leads the Tigers with 1,536 rushing yards and 18 touchdowns, while Tee Higgins is the team’s leading receiver with 56 catches for 1,115 yards and 13 touchdowns. He is questionable to play in the game because of a head injury. Justyn Ross is not far behind with 61 grabs for 789 yards and eight touchdowns.

On defense, Clemson has Isaiah Simmons leading the charge with seven sacks on the year. He also has three interceptions to his credit. Tanner Muse has been a force in the secondary with four picks of his own.