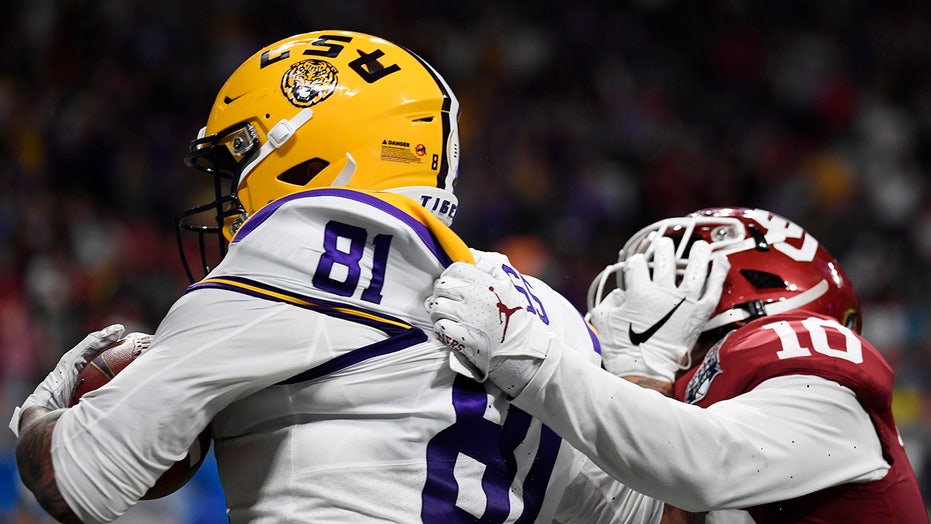 Randy Moss’ son was among the LSU Tigers players who had touchdown catches in the team’s blowout win over the Oklahoma Sooners on Saturday in the College Football Playoff semifinal.

Thaddeus Moss plays tight end for the Tigers and scored on a 62-yard touchdown pass from Joe Burrow with 4:48 remaining in the second quarter. The score and the extra point put LSU up 42-14 at that point. LSU would win the game 63-28 to advance to the national championship game.

After the win, Moss said the Sooners defensive players were talking a lot of trash and failed to back it up. He said Oklahoma didn’t come into the game as a top defense.

“They were not one of the best defenses we’ve played at all. If I were to rank them, they were probably about fifth,” Moss said. “They did a lot of talking out there on the field, but they didn’t play like it. We said that beforehand that we already knew this wasn’t going to be one of the best defenses we’ve played and if we went out there and played to our level of football, we would hang 60 or 70 on them.”

Moss, the son of Hall of Fame wide receiver Randy Moss, finished the game with four catches for 90 yards and the score. The former NFL star was in attendance to watch his son.

Thaddeus Moss has 42 catches for 534 yards and two touchdowns on the season.

Burrow finished the game with seven passing touchdowns and a rushing touchdown for good measure.

LSU will move on to play Clemson for the title.