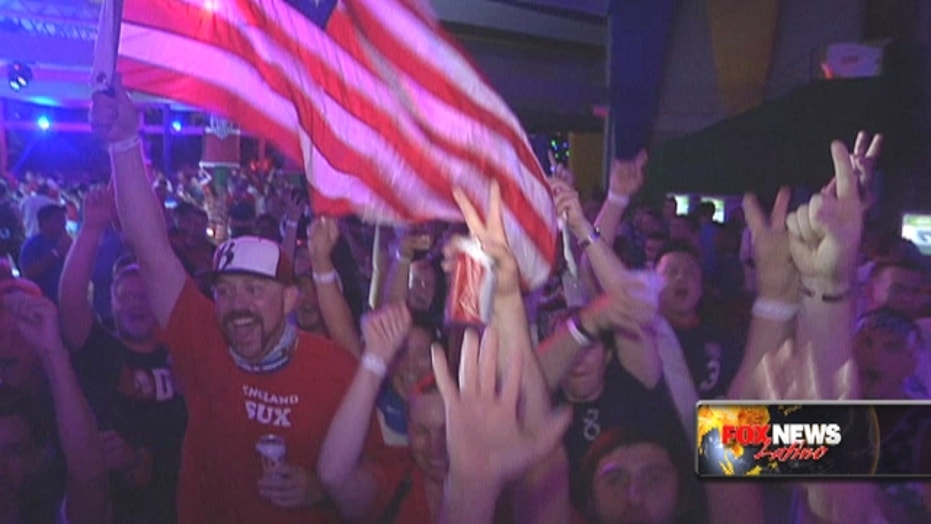 USA soccer fans cheer for their team at the World Cup

Some 500 of the most crazed fans called the American outlaws chartering two planes to follow the team through their first three games in Brazil.

Natal, Brazil – You would be forgiven if you thought that the official language in this seaside city in northeastern Brazil was English instead of Portuguese. From its beaches and sand dunes to its aging cobbled streets and the new Arenas das Dunas stadium, the red, white and blue jerseys outnumber the yellow shirts of Brazil’s national squad.

Led by the American Outlaws, the largest fan club of Team USA supporters, Natal has become ground zero for U.S. fans heading to the World Cup – joining pick-up soccer games on the city’s beaches and packing bars and restaurants before Team USA takes on Ghana in its first match on Monday.

“The environment here is pretty special,” Chad Bruhm, an American Outlaw from Atlanta told Fox News Latino. “We have a chance to shock the world. There’s no better chance to take down Germany, Portugal and our nemesis, Ghana.”

The torrential rain that had destroyed a number of homes and flooded much of the city, finally stopped by midmorning on Sunday, and the U.S. contingent began to emerge from their beachfront hotels for breakfast, jogs and to spend time on the beach.

A large number of American supporters from places like New York City, Vermont and Seattle were gathered on the beach under one of Natal’s massive dunes, where they were trying – mostly in vain – to beat a squad of young Brazilian footballers in a friendly match of beach soccer.

“I’m a 52-year old man who shouldn’t be out on the beach playing soccer under the best of circumstances,” Brian Sullivan, a U.S. soccer fan from Burlington, Vt., told FNL. “But I’m here in Brazil with these great players and this wonderful opportunity. It’s really once in a lifetime, and I’m going for it.”

The American Outlaws chartered two Boeing 767s from Houston that brought 530 fans to Brazil, and the U.S. Soccer Federation said it had sold out its official allotment of some 2,000 tickets.

Founded in 2007 by a group of fans from Lincoln, Nebraska, the American Outlaws set out to better organize supporters at U.S. men's national soccer team games.

The group, which has drawn both praise and criticism from the U.S. Soccer federation and other fans, is estimated to have more than 6,500 members and has largely been credited with bringing a European-style of fandom – i.e. organized chants, matching team colors, etc. – to U.S. soccer.

“They have been doing so much for the U.S. soccer team,” Chris Wagner, from Queens, N.Y., told FNL. “We’ve got cheers going, we’ve got chants going, it’s really been great.”

As the American Outlaws branched out in Natal, U.S. Soccer organized a massive party - turning a Volkswagen dealership on the city’s main drag into a makeshift nightclub complete with huge screens to stream World Cup games, a massive dance floor and an assortment of American beers.

The mood inside was festive with fans chanting, “I Believe That We Will Win,” and belting out “The Star Spangled Banner.”

The U.S. fans’ enthusiasm may have infected coach Jürgen Klinsmann, who caused a stir in the lead-up to the tournament when he said, "I think for us now, talking about winning a World Cup is just not realistic.”

Klinsmann revealed on Sunday that, despite his doubts, he had booked his return trip to the U.S. for after the Cup final on July 13.

The American team has never advanced after starting with a loss, and it is grouped with 37th-ranked Ghana along with No. 2 Germany and No. 4 Portugal.
So the game in Natal is key.