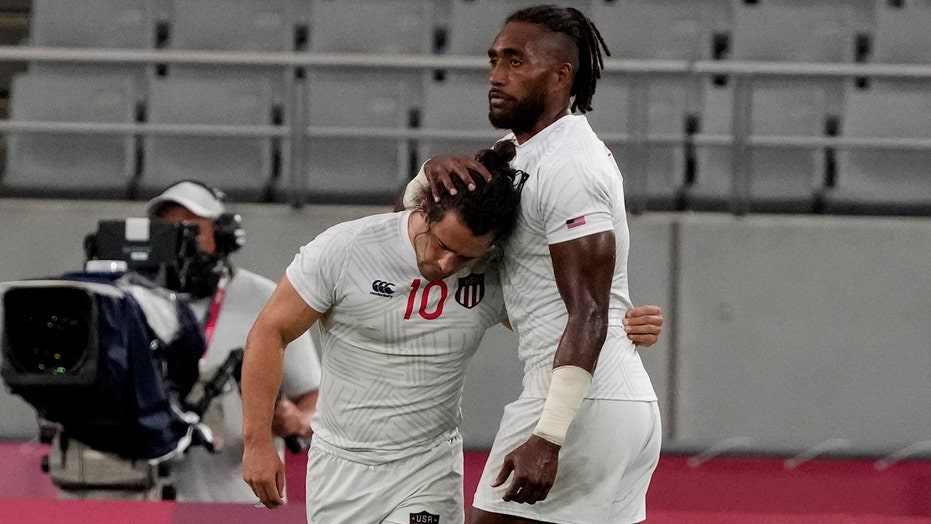 For rugby sevens veterans like Perry Baker, competing in the Olympics can involve a fine balance between gamesmanship and showmanship.

Gamesmanship because his U.S. team is full of talented, athletic players, has been ranked as high as No. 2 in the world sevens series and entered the Tokyo Games as a contender for an Olympic medal. Showmanship because they still need to market the sport in America.

U.S. players including Perry, a two-time world sevens series player of the year, and Carlin Isles, the fastest man in the game, said an Olympic medal at the Tokyo Games would put rugby more firmly on the American sporting map.

They were oh-so-close to making the medal rounds.

The Americans were leading Britain 21-0 on Tuesday, with Baker touching down twice, until the 2016 Olympic silver medalists rallied with four unanswered tries to secure a spot in the semifinals.

"We’re gutted. Hugely gutted. Sevens is brutal — little moments, little referee calls go your way, don’t go your way," U.S. coach Mike Friday said. "That’s the difference between being in the medal rounds tomorrow or not. Unfortunately, we’ve just fallen on the wrong side this evening."

The best the U.S. men can finish now is fifth. It’s an improvement from Rio de Janeiro five years ago, where they placed ninth when rugby sevens made its debut on the Olympic program.

"We've come from being no-hopers in 2014, to participating in 2016, to being contenders in Tokyo," Friday, who coached the England and Kenya national sevens teams before joining the U.S. program in 2014, said after the narrow loss to Britain. "But for a decision or two, or a bounce of the ball, we might be in the medal rounds."

Friday agreed that an Olympic medal would give the game more traction in America.

"We have been successful and we have moved forward, but let’s not hide from the fact: In America, they’re interested in gold, silver, bronze — predominantly gold," he said. "That’s where they wanted to see us tomorrow (so) ... I’m immensely sorry."

The U.S. team opened the Tokyo Olympics with wins over Kenya and Ireland on Monday. The Americans scored the first try against South Africa on Tuesday morning and went within inches of a try that could have put them ahead by 10 points, but they lost 19-12 to the 2016 Olympic bronze medalists to finish second in Pool C.

The fast pace of the game, the open spaces on the field and the condensed time frame — each game comprises two seven-minute halves, and there's multiple matches in every session — have made sevens a popular alternative to 15-a-side.

There will be a renewal of the U.S. program after Tokyo, with some players retiring and the search continuing for new talent.

The 35-year-old Baker came through the American football system, signing with the Philadelphia Eagles before an injury cut short his NFL prospects. He switched to rugby and became the world sevens player of the year in back-to-back seasons in 2017 and '18.

He said ahead of the Olympic tournament that the big appeal of sevens was the speed of the game which, unlike the traditional 15-a-side version of rugby, almost never stops. It's also the format of the game where the U.S. team has proved it can mix with the best in the world.

"Once we start winning, everyone wants to be part of a winning team."

Madison Hughes, a co-captain of the team and now a two-time Olympian, remains confident for the future. He was asked after he'd finished off a last-minute, length-of-the-field winning try against Kenya to explain the game's appeal.

"Rugby sevens is just an absolutely incredible spectacle. It’s so visual. The free-flowing elements of the ball flying it’s so exciting," he said. "Particularly in the Olympics, one of the best parts is that you don’t really need to understand what’s going on to enjoy it and get a lot out of it.

For Hughes, building the brand of the the U.S. team goes both ways. He is conscious that they need to convince people in the sport's traditional strongholds that America can be a force in the game.

"We know that we’re contenders and we know that we can beat anyone," he said. "But every time we get on the pitch, we’ve got to prove that not only to ourselves, but to the rest of the world."