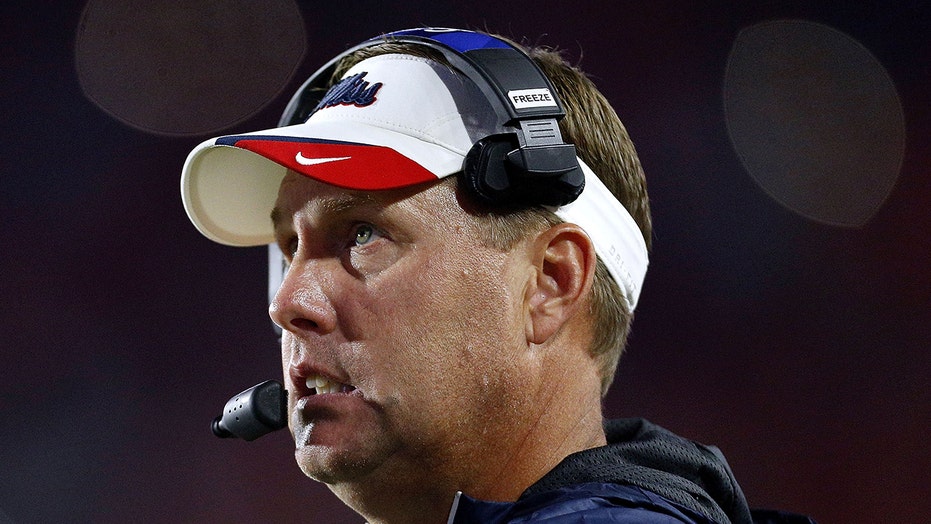 Liberty University head football coach Hugh Freeze, who is recovering from a life-threatening staph infection found during back surgery last month, coached his team and even gave a motivational speech from a coaches' box hospital bed at Williams Stadium in Lynchburg, Virginia, this past Saturday.

Freeze, 49, arrived at the stadium in a wheelchair where he was taken up to the box and placed in a hospital bed overlooking the football game between his Flames and the 22nd ranked Syracuse Orange.

Hugh Freeze, seen here coaching the Ole MIss Rebels in 2016, coached the Liberty Flames from a hospital bed during the team's opening game in Virginia on Saturday against Syracuse. (Jonathan Bachman/Getty Images, File)

Even so, his dedication and the images of him lying in the bed with a headset on, or waving to the opposing head coach, Dino Babers, as the clock was about to strike zero made for a surreal day of college football in Virginia.

"If felt different. It's odd that I'm not down there talking to officials and calling timeouts when we need to," Freeze said after the game while lying down and holding a soda in his right hand. "I had a hard time kind of finding the clocks too from here, I didn't have the game clock here that I could look at. It was kind of hard to see it over there, so it was a little different. Hopefully, I'll be back down there very, very soon."

Freeze's health issues began when he started experiencing back pain last month. He reportedly had suffered from back pain for years, but it started getting much worse during a scrimmage on Aug. 10. The next morning, he could barely walk.

“We had to call the ambulance to come get me,” he told ESPN.

He underwent surgery at the University of Virginia Medical Center the following week. Doctors ultimately found a staph infection, causing him to miss nearly two weeks of football practice.

"The hardest thing is just walking with the muscles being tight in the lower back," said Freeze, who added he's been trying to stay off his feet. Technology has helped him stay involved with the team from a distance, through the use of phones, live cameras and a walkie-talkie.

Saturday was the chance for Freeze to get back out there with his team as Liberty hosted a Power Five school for the first time in school history. Liberty had never had a ranked opponent at its 25,000 seat Williams Stadium.

"You got these Orange men from Syracuse that are coming down to our place. They are the bullies, they are the bigger boys," Freeze said during a pep talk before the game on Saturday "It really doesn't matter what conference you're from or what your rating is. Really, what matters is what you do for the given plays that you have out there today... Go get 'em, boys."

This was Freeze's first coaching opportunity since he resigned from Ole Miss over a scandal involving an apparent phone call to an escort service. He had a 39-25 record in five seasons as the Ole Miss Rebels head coach.

He says he will fly to Cajun Field in Lafayette, La., next Saturday, where his team is set to take on the Louisiana Ragin' Cajuns.