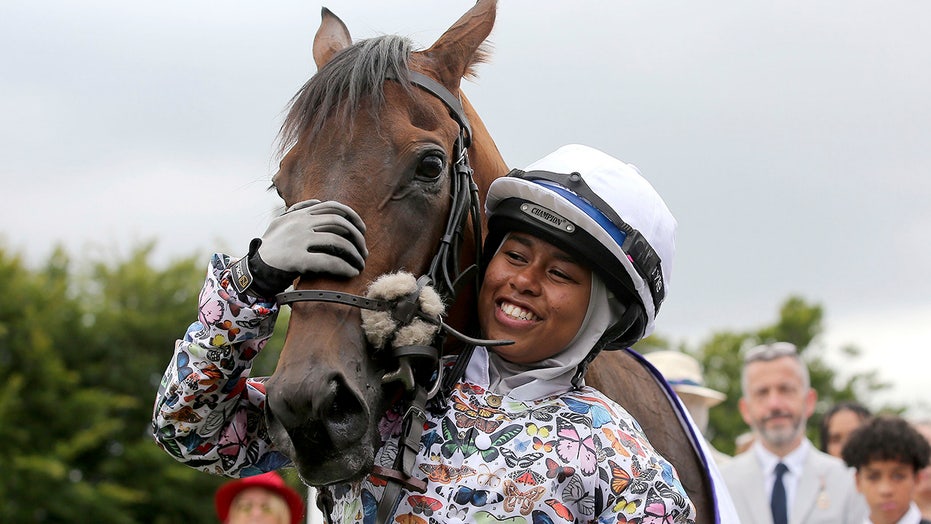 An 18-year-old teenager made history Thursday when she became the first female British Muslim jockey to ride – and win - a competitive horse race in the United Kingdom.

Khadijah Mellah, an amateur rider from Peckham, in south London, won the five-and-a-half furlong all-female charity race at Glorious Goodwood. She is believed to be the first person in the U.K. to appear in a competitive horse race while wearing a hijab.

“There are no words to describe this – I’m lost for words,” she told the BBC after winning the Magnolia Cup aboard Haverland. “When I passed the post I couldn’t believe it, and then I saw all my family and friends and started crying. I am quite competitive, so I wanted to win this race, but I never expected to.”

She beat out the likes of Olympics cycling champion turned jockey Victoria Pendleton.

British Jockey Khadijah Mellah poses for a photo, prior to the all-female Magnolia Cup - an amateur jockey's charity race, during day three of the Qatar Goodwood Festival at Goodwood Racecourse, in Chichester, England, Thursday, Aug. 1, 2019.  (PA via AP)

Jockey Frankie Dettori told BBC Sport that it was an “incredible” and “unbelievable” race to watch.

“I met her yesterday and she is such a sweet person,” Dettori added.

The teenager from Peckham is believed to be the first person to take part in a competitive horse race while wearing a hijab in Britain. (PA via AP)

Mellah learned to ride at the Ebony Horse Club charity in Brixton and sat on a racehorse for the first time in April this year.

“Horses bring me immeasurable amounts of happiness,” she said. “I’ve always loved them and always will and I hope to carry on and keep riding.”

The Muslim Women’s Sports Foundation told the BBC that the number of British Muslim jockeys – past and present – is in “single digits.”