A Hall of Fame horse trainer was banned from Santa Anita Park racetrack in Southern California on Friday after a 30th horse died at the track since this season's racing began in December.

A 4-year-old gelding trained by Jerry Hollendorfer was euthanized after suffering an injury while training at the track -- the fourth horse from Hollendorfer's stable that has succumbed.

Meanwhile, four horses set to race this weekend were scratched, according to the Los Angeles Times.

The company that owns the racetrack issued a statement after the latest horse death.

​​​​​​​Jerry Hollendorfer talks with reporters during the morning training for the 135th Kentucky Derby at Churchill Downs on April 27, 2009, in Louisville, Ky. (Getty Images)

“Individuals who do not embrace the new rules and safety measures that put horse and rider safety above all else will have no place at any Stronach Group racetrack,” the company said.

The racetrack added that Hollendorfer does not meet its standard of “safety” and “accountability.”

"Mr. Hollendorfer is no longer welcome to stable, race or train his horses at any of our facilities," the statement said.

"Mr. Hollendorfer is no longer welcome to stable, race or train his horses at any of our facilities."

Hollendorfer also had two horses die at another track several months ago.

The trainer said he thought the decision against was “premature.”

“I’m trying to work out a plan now. The only thing I have to say is every time anyone loses a horse the whole backstretch loses,” he told the Daily Racing Form.

Horses trained by the 73-year-old Hollendorfer have won more than 7,600 races over the last 40 years, the Daily Racing Form reported. 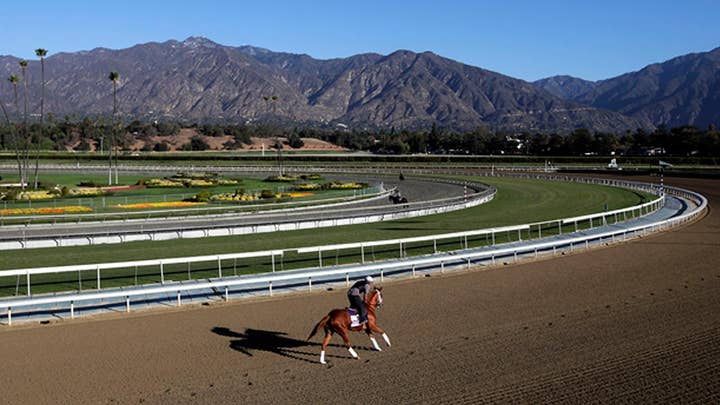 Santa Anita Park has come under scrutiny for the sheer number of horse deaths this meet. The track was closed for a short period of time but soon reopened, the Times reported.

U.S. Sen. Dianne Feinstein, D-Calif., and U.S. Rep. Judy Chu, D-Pasadena, have both called for the track to halt racing until a full investigation can be completed, FOX 11 reported.