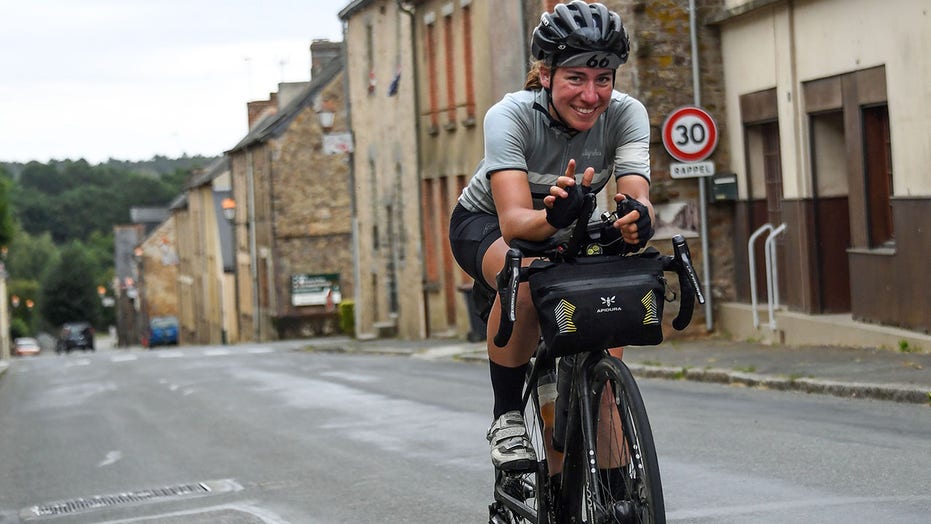 The 24-year-old German began the ultra-endurance race on July 27 in Bulgaria, and traveled through several other countries before crossing the finish line 10 days, two hours and 48 minutes later in Brest, France. Kolbinger, one of 40 female cyclists in the competition, outpaced 225 male competitors.

"I am so, so, surprised to win," the rookie TCR cyclist told competition officials after the race. "When I was coming into the race I thought that maybe I could go for the women's podium, but I never thought I could win the whole race."

Although this was her first cycling competition, Kolbinger believes she never reached the limit of her endurance as she withstood the scorching heat and freezing rain.

Kolbinger was one of 265 competitors in the ultra-endurance bicycle race through Europe. (DAMIEN MEYER/AFP/Getty Images)

Competitors must be self-supportive, planning, researching and navigating their own course, which can include routes through Austria, Bulgaria, Bosnia, Croatia, France, Italy, Kosovo, Serbia, Slovenia and Switzerland. The cyclists must also choose when and where they rest.

Depending on the route chosen, cyclists will encounter varied terrain and climbs up weaving mountain passes, such as traveling at an altitude of 8,000 feet through the Timmelsjoch in the South Tyrol between Italy and Austria.

While Kolbinger appeared not to break a sweat, she admitted the biggest struggle came during the final push, saying: “Last night was too long, too dark and too grim.”