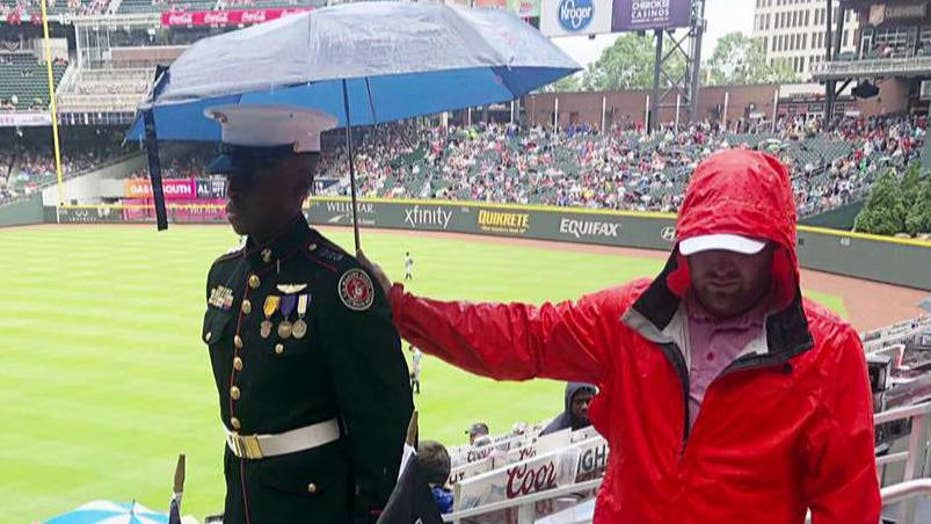 Baseball fan holds an umbrella over a JROTC cadet

Baseball fan holds an umbrella over a JROTC cadet to shield him from the rain during a Braves game.

A simple gesture by a fan to a JROTC member at the Atlanta Braves game on Memorial Day was captured in a powerful image.

The fan, dressed in a red raincoat, held his umbrella over a U.S. Marine Corps JROTC member as he stood at attention next to the Braves’ POW-MIA Chair of Honor in the rain, according to FOX5 Atlanta.

The Braves tweeted the image and described the gesture with one word: “Respect.”

Another fan took a snap of the act from a different angle.

“They sacrifice so much for us, we can sacrifice for them too!!! #RespectOurMilitary,” the fan tweeted.

The Braves dedicated the Chair of Honor at SunTrust Park last year.

“Since World War I more than 92,000 American soldiers are unaccounted for,” a plaque next to the chair reads. “This unoccupied seat is dedicated to the memory of these brave men and women and to the sacrifice they made in serving this country.”