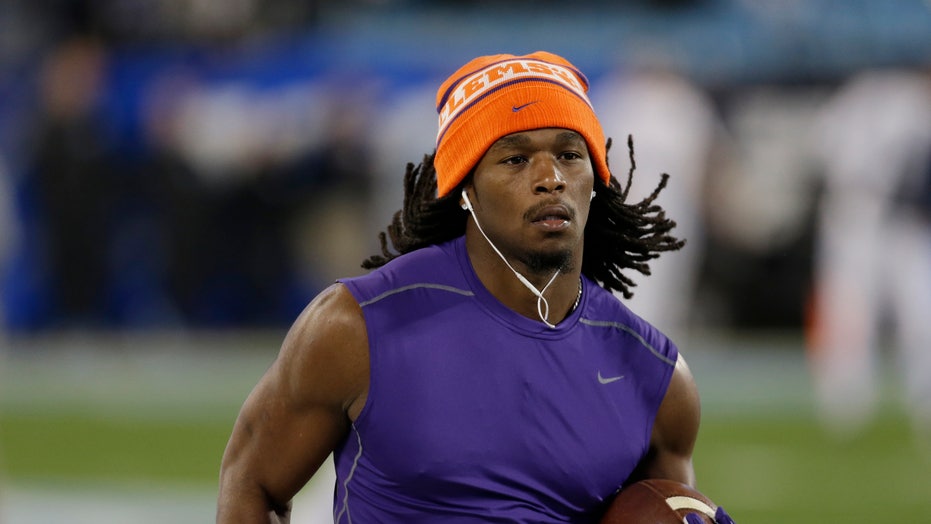 Former Clemson and East Carolina running back Tyshon Dye drowned on Friday during a family outing at a park in Georgia.

Dye, 25, had been swimming with his two brothers at Richard B Russell State Park in Elberton when he started to tire and couldn't make it to land, according to Elbert County coroner, Chuck Almond.

His two brothers saw him go under the water, but couldn't help him, Almond told the Greenville News.

A 911 call was made by his family at 4:50 p.m. on Friday and his body was recovered from the Lake before 6:00 p.m. The coroner's office ruled the former college football player's death an accidental drowning.

Dye played three seasons at Clemson as a backup running back from 2014 to 2016, including a reserve role on the Tigers' 2016 national championship team, before transferring to East Carolina for his senior season. He rushed for 351 yards and five touchdowns at Clemson and during the team's national championship season rushed for 109 yards on 21 carries, including a touchdown during their win against Boston College.

His former coach at Clemson, Dabo Swinney, released a statement regarding his passing.

“All of our hearts are just broken,” Swinney said. “Our thoughts and prayers are with his family. I can honestly say Tyshon Dye is one of the sweetest souls I’ve ever been associated with or coached. We’re just all heartbroken tonight, and we’re praying for his family and know that he’s been called home.”

In a Twitter post, his former teammate at Clemson, Wayne Gallman II, said Dye was 'loved by everyone'.

Dye graduated from Clemson with a degree in parks, recreation and tourism management in May 2017. He went to high school in Elbert County, Georgia, where he rushed for 1,561 yards and 21 touchdowns as a junior.