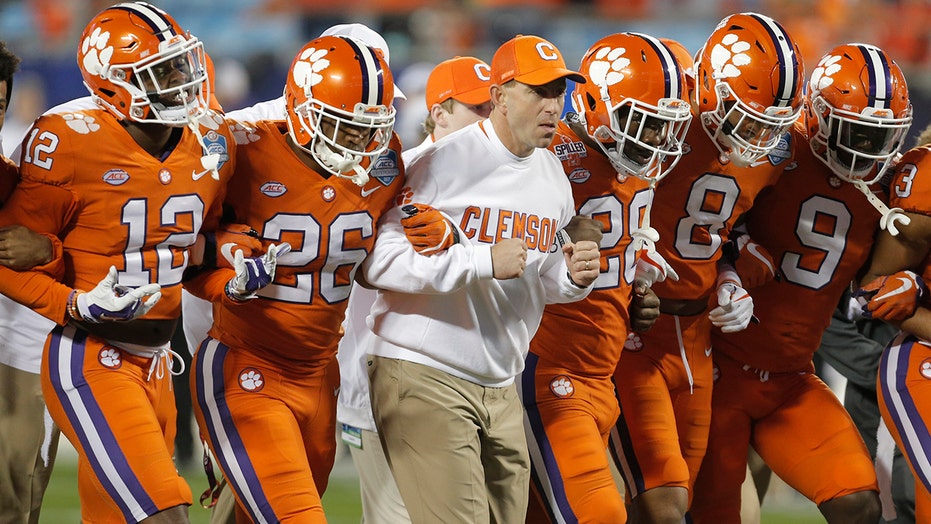 Gamecocks fans threw trash and bottles at Tigers players during warmups. The game was being played at Williams-Brice Stadium in Columbia, S.C. and Clemson won 34-10.

South Carolina coach Will Muschamp was holding his weekly radio show last week and the trash incident came up. South Carolina play-by-play broadcaster Tony Ellis suggested that Clemson’s tradition was to blame since they walked up to the goal line where the Gamecocks’ student section was.

“The Tigers put us in a tough position as well,” Ellis said, according to Clemson Maven. “One of the things that they do, and God bless them what they want to do in pregame they do, is grasp those arms and they walk from midfield towards our student section. Maybe that is something they could modify if they felt like it was provoking them in some way.”

Ellis added that there is an expectation for students to “act with class” during games and that throwing objects on the field was inexcusable.

Swinney wasn’t a fan of what Ellis said even if the host tried to soften the blow with the expectations of fans.

“It’s just ridiculous,” Swinney said, according to WYFF4-TV. “It's not any type of taunting. It’s a unity thing for our team. It’s something we do every single game. If it was something we just did on the road, I could see that. … I don't think anyone should be distracted by how a team warms up. You can yell and scream and holler and all that’s part of it. But when you start throwing things, it’s all fun and games until somebody gets their eye knocked out.”

Swinney added: “There's right and there's wrong, and we shouldn't lose our perspective because of our passion for a game.”

Clemson is going into the game as the No. 3 team in the nation. The defending champions are 11-0 this season while South Carolina is 4-7.

The Gamecocks haven’t won the rivalry matchup since 2013.