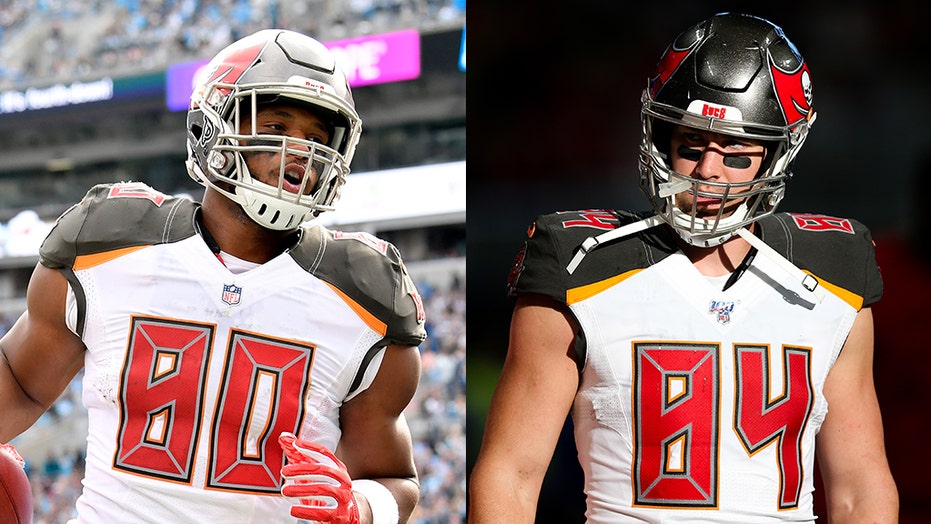 The Tampa Bay Buccaneers are reportedly set to acquire tight end Rob Gronkowski from the New England Patriots, reuniting him with Tom Brady who was his teammate for nine years.

The reported acquisition of Gronkowski now gives the Buccaneers three dynamic tight ends for either Brady to work with or to trade for some sort of compensation.

The two tight ends who will now be No. 2 and 3, respectively, to Gronkowski are O.J. Howard and Cameron Brate.

O.J. Howard is a tight end on the Buccaneers. (Photo by Jonathan Bachman/Getty Images)

Tampa Bay selected Howard with the No. 19 pick of the 2017 draft. He has played in 38 games for the Buccaneers over the course of three seasons and has been one of the top targets for the team even as their playbook didn’t utilize the tight end position very much.

Last season, Howard recorded 34 catches for 459 yards and a touchdown. He was expected to get more targets as Brady got used to the offense.

Brate has been with the Buccaneers longer, but the result has been the same. He’s appeared in 82 games for Tampa Bay since he entered the league in 2014. Tampa Bay initially signed him as an undrafted free agent out of Harvard but had to be re-claimed off the New Orleans Saints’ practice squad in 2015.

Last season, Brate had 36 catches for 311 yards and four touchdowns. Brate has 24 touchdown catches since 2016 -- the fourth-most in the NFL among tight ends.

Both Howard and Brate were No. 4 and 5, respectively, in receiving yards last season with the Buccaneers.

It’s unclear whether either player stays on the team since Gronkowski has been acquired.

There were no immediate reports that the Buccaneers were looking to move Howard or Brate.

Tampa Bay was 7-9 last season. The team could add another offensive weapon with the No. 14 pick of the draft on Thursday.