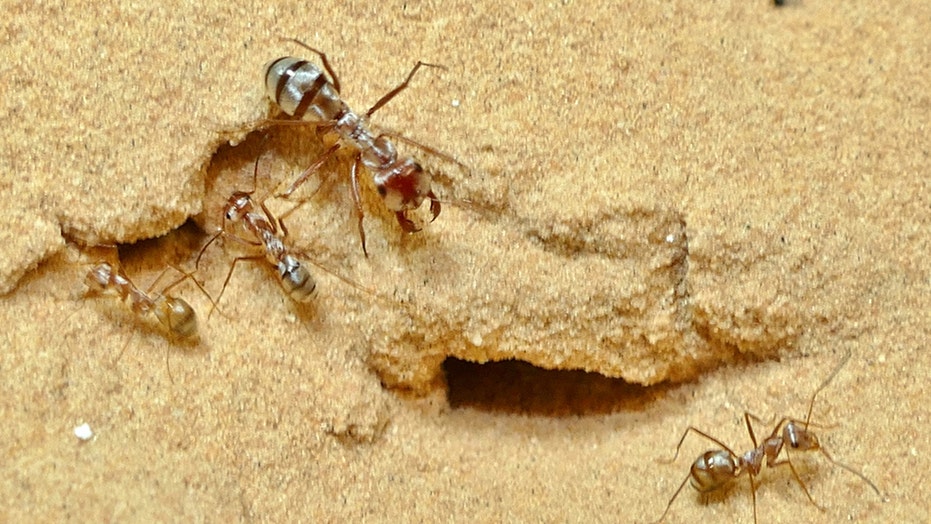 Move over, Usain Bolt. We've got a new speed demon.

The speed of the fastest ant in the world has been recorded, traveling at 108 times its body length in a single second, or the human equivalent of 360 miles per hour.

The fastest ant in the world has been unveiled by scientists. Named the Saharan silver, after its home, it can cover almost a yard - in a single second. That's 108 times its body length of a third of an inch. (Credit: SWNS)

"Even among desert ants, the silver ants are special," said Harold Wolf, co-author of a study on the insect, said in a statement.

Wolf, along with other researchers were on a trip to Tunisia in 2015 study the silver ant's cousin, Cataglyphis fortis, when they filmed the remarkable ants moving their six legs at 1,300 millimeters per second. To make it more impressive, the ants are doing it in the hottest place on Earth, where temperatures on the sand can reach 60 degrees Celsius, or 140 degrees Fahrenheit.

The study's lead author, Sarah Pfeffer, said that after finding the ants in the dunes in Tunisia, they looked for their ants to film them in action. "We had to look for digging ants or follow a foraging ant back home," she said in the statement.

Eventually, the found the nests and put out food to lure them out. "After the ants have found the food—they love mealworms—they shuttle back and forth in the channel and we mounted our camera to film them from the top," she added.

The Saharan silver's muscle contraction speed may be "close to physiological limits",  researchers say. It reaches a record speed of 33.7 inches (855 millimeters) a second by swinging its tiny legs incredibly quickly - at up to 4ft 3in (1,300 millimeters) a second. (Credit: SWNS)

Perhaps even more remarkable is that Saharan silver ants have limbs that are nearly 20 percent shorter than C. fortis. The researchers believe their super speed may be attributed to their footwork.

Instead of running, they often gallop, with all six feet off the ground at once, with their feet hitting the ground for as little as 7 milliseconds before the next stride, the researchers discovered. "These features may be related to the sand dune habitat," Wolf said, adding "[they] could prevent the animal's feet from sinking too deeply into the soft sand."

More research is needed to figure out how the ants are doing this, though Wolf suspects it may require "require muscle contraction speeds close to physiological limits."

The research has been published in the Journal of Experimental Biology.