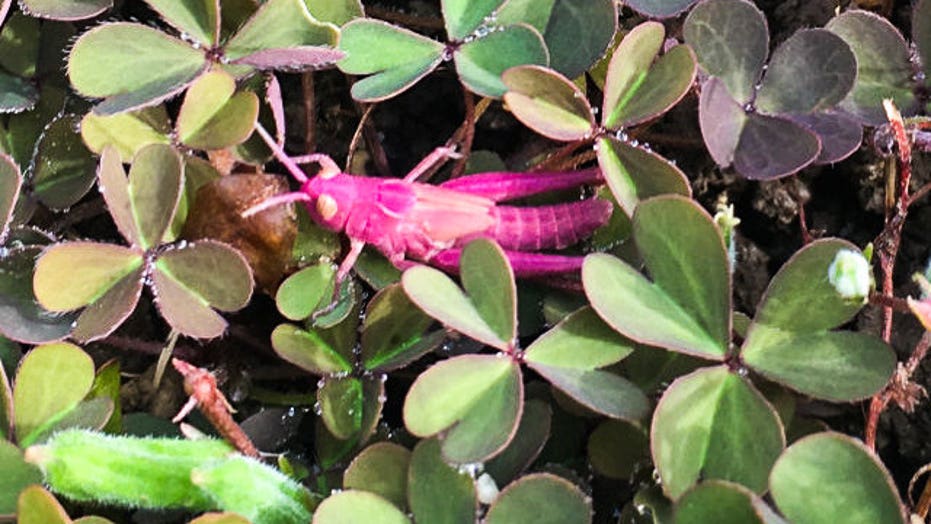 A British woman recently came across a colorful and not-commonly-seen insect while gardening: A pink grasshopper.

Kate Culley, 41, told SWNS she was helping in her grandmother's garden in Gloucestershire —  a county in South West England —  when she spotted the grasshopper. Though the vibrant insect was quick to hop away, Culley managed to capture a picture of it just before it did.

THOUSANDS OF TARANTULAS SET TO CRAWL THROUGH COLORADO SEARCHING FOR MATE

“I was surprised — you don't expect to see a pink grasshopper," she told the news outlet, noting she was “lucky” to snap the photo in time.

“It was unusual, I've never seen one like that before,” she added.

These pink creatures are likely a “rare morph of the common meadow grasshopper Chorthippus parallelus,” according to a 2013 National Geographic blog post.

Pink grasshoppers — which “rarely” make it to adulthood because they are easily noticed by predators, per the blog — are likely pink because of a genetic mutation called erythrism. The mutation, according to National Geographic, is caused by a recessive gene “similar to that which affects albino animals.”

In this case, however, the mutation results when the animal overproduces red pigments or underproduces dark pigments.

The blog noted seeing such an insect is “extremely rare.”

In humans, erythrism may be responsible, at least in part, for red hair and freckles, according to the Huffington Post.