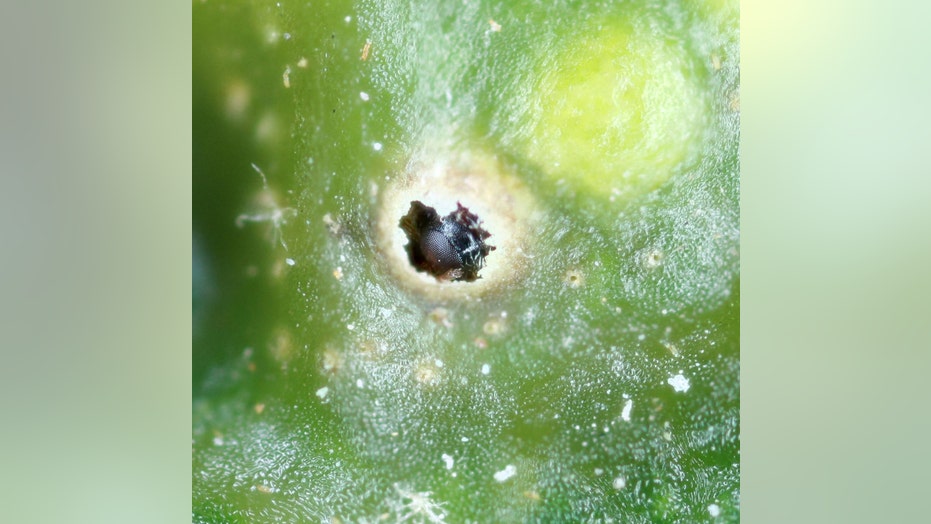 A recently discovered wasp can apparently control the minds of its victims.

Euderus set, otherwise known as the crypt-keeper wasp, has the uncanny ability to control the actions of multiple species of gall wasps, enabling them to be parasitized and die in a horrific fashion.

Galls are abnormal, tumor-like growths on oak trees created by gall wasps as a shelter for their larvae. Once the gall wasp larvae become adults, they eat their way out of the gall and fly away. The crypt-keeper wasp (named after the Egyptian god Set who trapped his brother in a crypt before killing him) also deposits its eggs in the gall. Crypt-keeper larvae then burrow into the gall wasp hatchlings.

WILDLIFE PHOTOGRAPHER CAPTURES IMAGES OF DRAGONFLIES COVERED IN DEW: IT 'CLUNG TO THEIR BODIES LIKE JEWELS'

A host gall wasp matures and begins to chew its way out of the gall as it normally would, but then, as observed by researchers from University of Iowa and Rice University, something strange happens: the host gall wasp quits eating its way out, making a hole only large enough for its head to squeeze through.

“When the gall wasp is attacked by Euderus set (the crypt keeper), the gall wasp still starts to chew an exit hole but fails to emerge and results in what we referred to as a ‘head plug’,” the study's lead author, Anna Ward of the University of Iowa, told Fox News. “We identified head plugs by observed wasps that had stopped chewing their exit holes and were unresponsive – and visually looks like a wasp head blocking a hole in the gall.”

After feeding on the gall wasp’s body from the inside, the crypt-keeper wasp burrows out of the hosts' head. Alien, eat your heart out.

What’s baffling researchers is how the crypt-keeper larva, once inside the gall wasp, is somehow manipulating its host to eat such a small hole, leaving only the host’s head exposed.

“Currently, we are not certain of the mechanism in which E. set is manipulating its host,” Ward explained. “Though we predict that this is a simple mechanism that involves stopping or paralyzing the host at the right moment where it has chewed part of the exit hole but before it emerges.”

To study this phenomenon, the researchers had the odious task of collecting galls in the wild, eventually gathering over 23,000 of the wasp-made shelters with over 100 species of gall wasps, along with some Crypt-keepers, inside. According to Ward, collecting the galls themselves wasn’t all that difficult.

“Oak galls are fairly common throughout North America and are found on all species of oak trees,” she said. “In order to collect the wasps, we simply collect the galls that the wasp is developing inside of.”

The team then brought those galls back to their lab and waited for the wasps to emerge, where they could observe the occasional crypt-keeper wasp in action. They eventually observed the crypt-keepers bursting out of the heads of 305 wasps from seven different gall wasp species.

The crypt-keepers were choosy about their victims as well, preferring gall wasps without spikes or fur on their bodies.