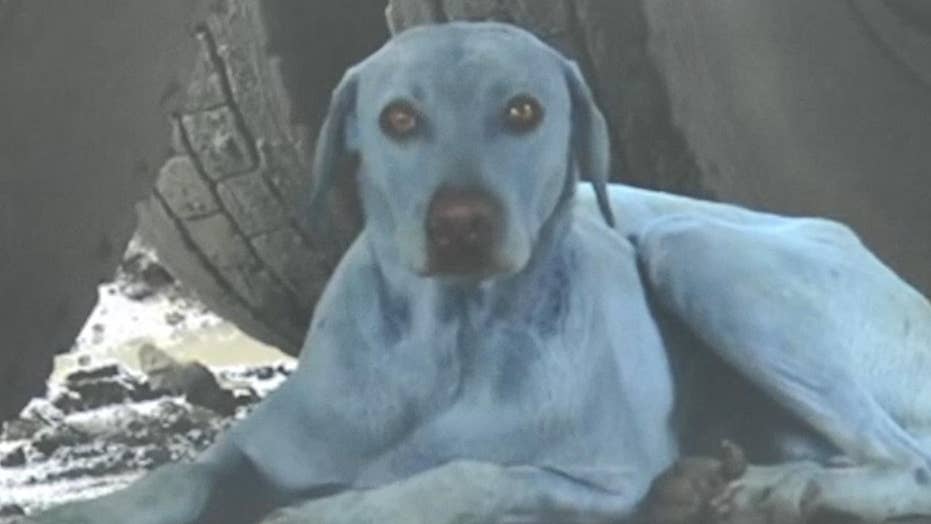 Why are dogs in India turning blue?

Stray dogs in Mumbai, India that wade into the Kasadi river are turning blue

A strange phenomenon in an Indian industrial district has put a factory on thin ice and a bunch of canines in the bathtub. A report in the Hindustan Times posted in mid-August noted that dogs with bright-blue fur had been spotted roaming in Navi Mumbai's Taloja area.

After initial head-scratching, Maharashtra Pollution Control Board officials now believe the dogs took a dip in the Kasadi River and came out blue from untreated industrial waste.

Officials also think they've found who's responsible for the pollutants: a factory that uses blue dye to make detergent. "It was shocking to see how the dog's white fur had turned completely blue," says Navi Mumbai Animal Protection Cell's chief.

The Guardian reports 11 blue dogs have so far been seen, though National Geographic notes the dye seems to be water-based and the dogs don't seem to be suffering any ill effects (lab tests are still ongoing).

A recent Facebook post from the Navi Mumbai animal welfare group notes that pollutants from industrial activity—the Guardian notes there are nearly 1,000 chemical, pharmaceutical, and other types of factories in the Taloja area—may also be affecting birds, reptiles, and humans.

The factory in question, identified as Ducol Organics Pvt. Ltd., has been notified it will be shuttered if it doesn't meet pollution standards within 15 days, the Hindustan Times reports.

MPCB officials say the factory is also accused of releasing leftover dye powder into the air. A temporary gate has since been erected around the factory to keep the dogs out of the water nearby.

National Geographic also dives into the history behind India's huge population of "community-owned" dogs and why they're protected by law there. (Read about another atypically blue item.)