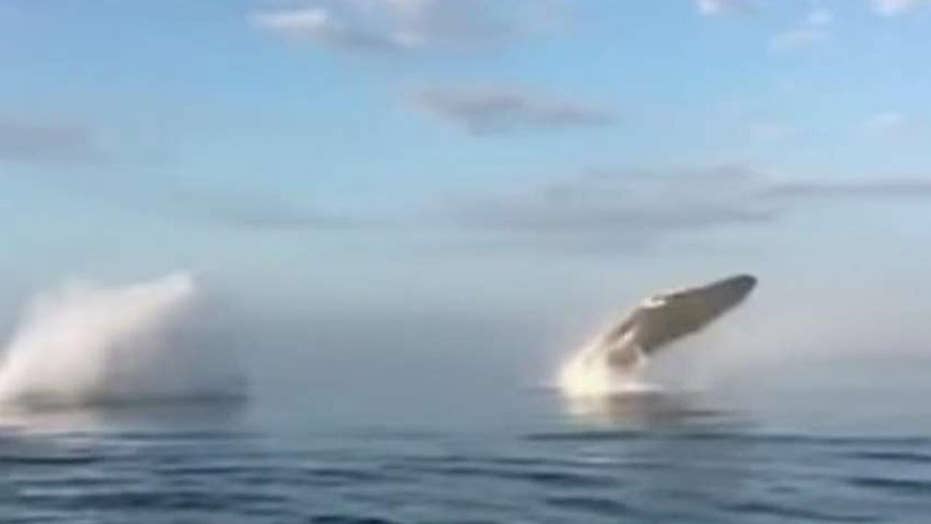 Three humpback whales breach in succession off the coast of Nova Scotia to the amazement of whale watchers.

Tourists on a whale cruise were treated with a spyhop last month when three humpback whales launched one-by-one in succession off the coast of Nova Scotia in a rare triple breach.

Edmond Giroux was aboard the Ocean Explorations Zodiac Whale Cruises when he began filming the three whales that surfaced near the boat on August 17.

“Get ready!” a man who is most likely the tour guide is heard saying. “It’s going to be a triple breach!”

The whales could be seen first breathing through their blowhole, then diving down, one by one, and then rising above the water, twisting their majestic bodies and then splashing horizontally down back into the ocean.

Spyhopping is animal behavior -- usually whales or some sharks -- exhibit when they vertically poke their head half-rise out of the water to view the surroundings near water’s surface, according to the National Geographic Society, citing oceanographers.

The boat’s onlookers clapped in awe and squealed with glee.

“Oh! How’d you know that?” a passenger was heard saying in the video.

The tour operators wrote in a Facebook post that whales surfaced after a dive and “swam and/or drifted” over to them.

“One ‘interacted’ with us before joining the other two ‘logging’ for many minutes before ‘take off,’” the whale cruises wrote.