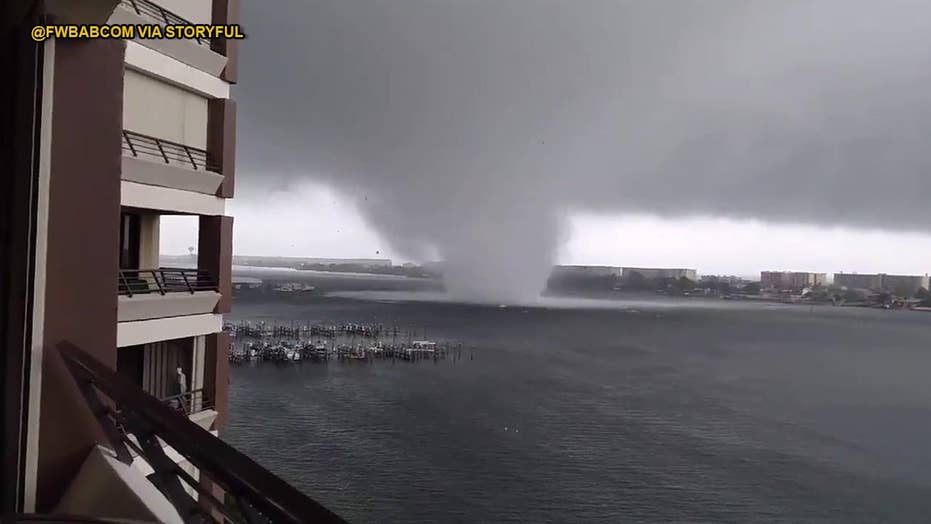 Check out this dramatic video as a waterspout roars ashore on Okaloosa Island and Fort Walton Beach, Florida, heavily damaging at least one home, downing trees and power lines and tossing vehicles.

A powerful waterspout was captured on video in the Florida Panhandle Sunday.

The swirling phenomena was seen tearing through Okaloosa Island, passing over a sound then making landfall in Fort Walton Beach, according to WEAR-TV.

Dave Perkins and his wife witnessed the destruction.

“Water started coming up out of the Gulf, tore up one of the buildings, roof came off, boat flipped over, pieces of debris are falling out of the air,” he told the station.

Michelle Seitz, a long-time resident of Okaloosa Island, said her house was destroyed.

“We heard stuff rip off the house. We came upstairs, saw the roof was off over kitchen area, boat was gone, banisters were gone,” she described to WEAR-TV. “At the time, the tornado was sitting in the middle of the sound turning."

The National Weather Service (NWS) in Mobile/Pensacola said Monday that tornado survey teams have been dispatched to the Fort Walton Beach and Molina areas in Florida, as well as to Crenshaw and Escambia Counties in Alabama to “assess additional potential tornadic damage.”

In nearby Baldwin County, Alabama, the NWS confirmed Sunday night that two EF-0 tornadoes touched down in the area, leaving at least 5 people injured. The category of tornado is the lowest on the Enhanced Fujita scale, which goes up to EF-5.

A water spout forms over water or moves from land to water and shares the same characteristics of a land tornado, according to the National Oceanic and Atmospheric Administration.

About 500 waterspouts form off the coast of Sunshine State each year, according to the Palm Beach Post, though the majority of them sprout up near the state’s southeastern region.