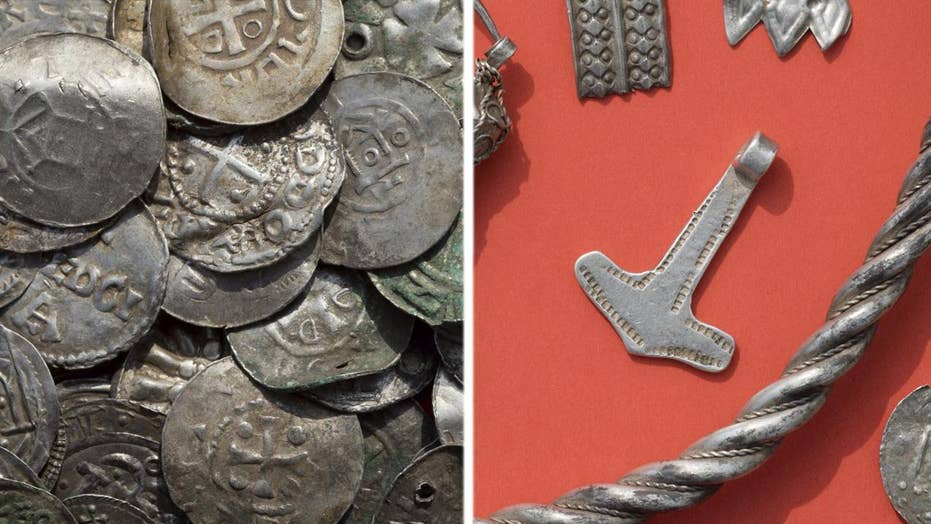 A treasure trove has been uncovered in the eastern German island of Ruegen in the Baltic Sea. The find includes Hundreds of 1,000-year-old silver coins and jewelry. One of the rare jewels depict ‘Thor’s hammer.’

An incredible trove of silver treasure linked to the era of a famous Viking king has been discovered on an island in the Baltic Sea.

Hundreds of 1,000-year-old silver coins, rings, pearls and bracelets have been found on the German island of Ruegen. The haul includes a piece of jewelry depicting “Thor’s hammer,” according to Ostsee-Zeitung.

Archaeologists said about 100 of the silver coins are probably from the reign of Harald Gormsson, better known as "Harald Bluetooth," who lived in the 10th century and introduced Christianity to Denmark. The king, who earned his nickname on account of a dead tooth that appeared blue, is a significant historical figure who unified parts of Scandinavia.

Harald Bluetooth was one of the last Viking kings of what is now Denmark, northern Germany, southern Sweden and parts of Norway.

Jewelry and coins found near Schaprode on the northern German island of Ruegen in the Baltic Sea. (Stefan Sauer/dpa via AP)

Bluetooth wireless technology, invented by Swedish telecom company Ericsson to connect computers and wireless devices, is named after the king.

"It's the biggest trove of such coins in the southeastern Baltic region," archaeologists said, in a statement.

This April 13, 2018 photo shows medieval Saxonian, Ottoman, Danish and Byzantine coins found near Schaprode on the northern German island of Ruegen in the Baltic Sea. (Stefan Sauer/dpa via AP)

Other artifacts from the time of Harald Bluetooth have been found in the area. In the 19th century the “Hiddensee treasure,” a trove of stunning gold jewelry was found on a nearby island.

The Ruegen silver treasure is just the latest fascinating archaeological find from the Viking era. Last year, for example, an incredibly well-preserved Viking sword was found by a reindeer hunter on a remote mountain in Southern Norway. In 2016, archaeologists in Trondheim, Norway, unearthed the church where Viking King Olaf Haraldsson was first enshrined as a saint.