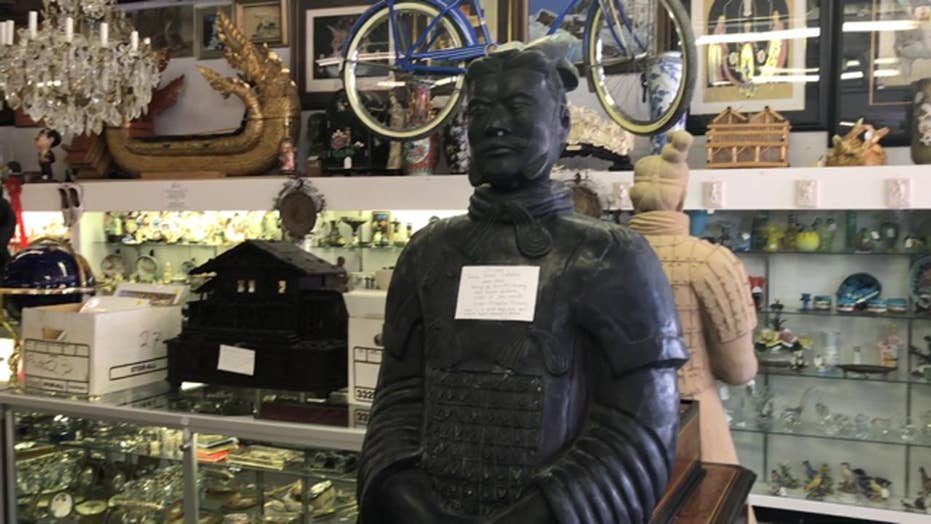 Vegas antique shop is full of the rare and bizarre

In a nondescript building with an unassuming facade in the old downtown of Las Vegas, sits a shop full of rarities that one man has spent his entire life collecting. Perusing the showroom floor, shoppers and the curious alike pass by thousands of bizarre items including mummified skulls, a human foot in a jar and a replica of Michelangelo’s David.

Don Demarest owns Las Vegas Oddities and Antiquities and started collecting anything that sparked his interest when he was just 13 years old.

He has never had a “normal job” and didn’t finish high school, but got his start in the jewelry business in the 1960s. Demarest also spent time in the Amazon rainforest working on a gold mine operation where he found a lot of the items he has in his store today. “We collected a lot of shrunken heads and a lot of rarities and brought them back up to the States," Demarest told Fox News.

The shop is part natural history museum, part art gallery, plus taxidermy zoo and scientific lab. Demarest says it’s sometimes hard to part with the items because they hold such a sentimental value for him, including a story of the Marc Chagall small pastel hanging in his office. Someone offered him $25,000 for it and Demarest just couldn’t sell it and ultimately backed out of the sale.

Demarest does enjoy passing on his items to customers so they can share in the appreciation for the history and joy of the find.

He recently sold a Chinese statue believed to be over six centuries old. “This is hopefully something he’s going to have the rest of his life and he can pass the story to whoever he gives it to and they can perpetuate the story forever," Demarest added.

The store has no explicit theme, but it's grouped in a flurry of categories. Priceless art hangs on the ceilings from Barry Goldwater’s photographs to Red Skelton’s Clown portraits to the Picassos (yes he has mutliple.)

There's also an African birthing chair, jars of preserved creatures, a real human skull and a Mayan Death mask dot the floor making for an artful presentation. In a glass case, patrons can find the Soviet space suit of the first female to walk in space.

Tucked in the back however, is the grand finale, the largest item on sale. A full wax replica of the Last Supper that used to be housed in Madame Tussaud’s now sits for sale, the apostles and Jesus dressed in colorful robes.

Demarest noted there are some things too valuable to put a price tag on, but that most of the items are for sale in the store. He does his due diligence when it comes to verifying the authenticity of certain rare items. Many objects are marked with a placard that denotes the certification.

Due to the vastness of his collection, he has a separate warehouse nearby where he keeps more objects and he's become an expert in his own right on a variety of different subjects and attributes it to the numbers of books he has read.

“My knowledge came from books and references, probably 1,000 and 2,000 books of different references between art and antiquities and rarities," Demarest said. "I’m not a Google expert, but I’m a book expert.”