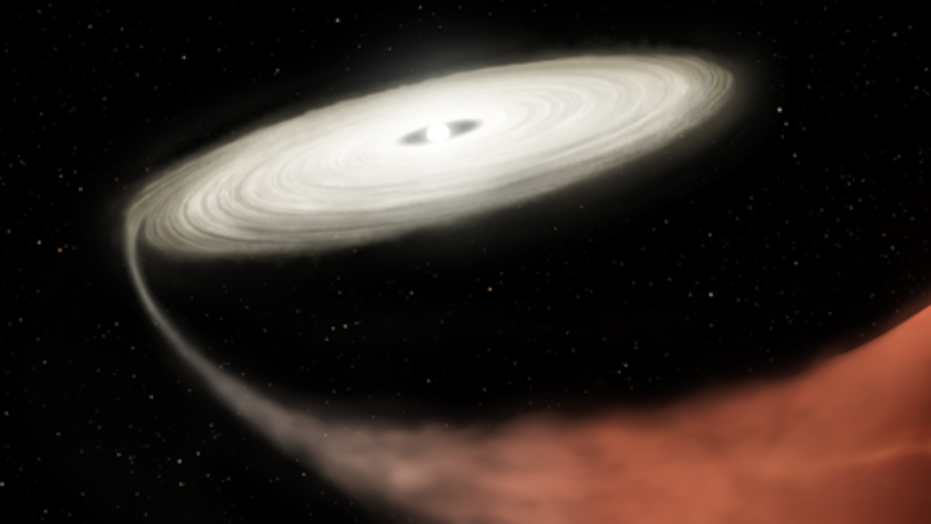 Scientists have used data from NASA’s Kepler space telescope to discover a “vampire” star “sucking” the life out of another star.

Experts discovered a surprising “super-outburst” from a dwarf nova, a type of “cataclysmic variable star.” According to NASA, the star system, which consists of a white dwarf star and its much smaller brown dwarf companion, was seen brightening by a factor of 1,600 over less than a day. It then slowly faded away.

“The brown dwarf circles the white dwarf star every 83 minutes at a distance of only 250,000 miles (400,000 km) – about the distance from Earth to the Moon,” said NASA in a statement. “They are so close that the white dwarf's strong gravity strips material from the brown dwarf, sucking its essence away like a vampire.”

The space agency explained that the stripped material forms a disk as it “spirals” toward the white dwarf, which is known as an accretion disk.

A team led by Ryan Ridden-Harper of the Space Telescope Science Institute (STScI), Baltimore, Maryland, and the Australian National University, Canberra, Australia made the discovery by searching Kepler archival data.

Only about 100 of this type of dwarf nova systems are known, NASA said, and it can take years or even decades for an outburst to occur.

"In a sense, we discovered this system accidentally. We weren't specifically looking for a super-outburst. We were looking for any sort of transient,” said Ridden-Harper, in the statement.

The research was published in the Monthly Notices of the Royal Astronomical Society.

The find is just the latest discovery made using data from the Kepler space telescope. In 2015, for example, the Kepler mission discovered Kepler-452b, the first near-Earth-size planet in the “habitable zone” around a sun-like star.

In 2016, experts from NASA’s Goddard Space Flight Center and San Diego University used the Kepler Space Telescope to spot Kepler-1647 b, a planet with two suns in the Cygnus Constellation.