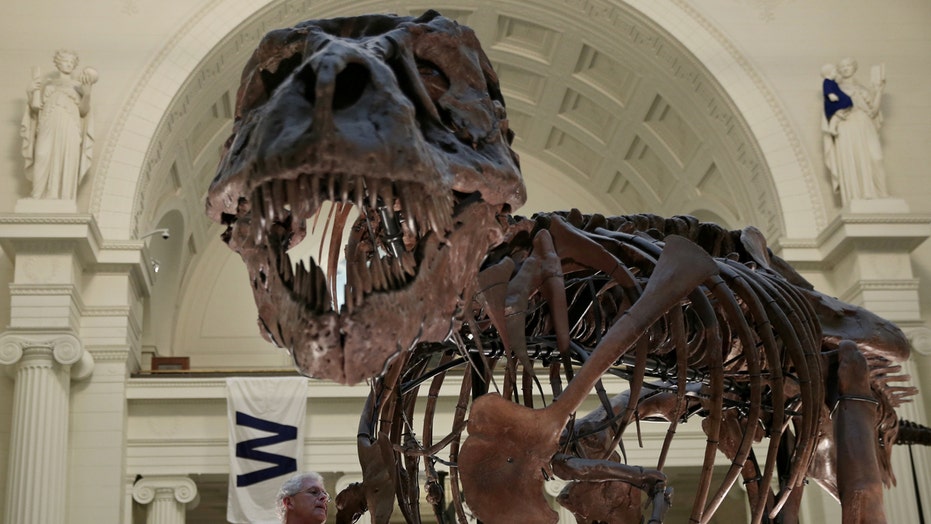 Putting to bed the theory that there was a pygmy species of Tyrannosaurus rex, a new study has confirmed the most fearsome dinosaur to ever walk the Earth underwent a massive growth spurt as a teenager.

The research, published in Science Advances, shows that the two fossils discovered in the early 21st century — known as Jane and Petey — were approximately 13 and 15 years old, respectively, and only slightly taller than a modern-day draft horse and twice as long. By comparison, a full-grown adult T. rex could reach 40 feet in length.

"Historically, many museums would collect the biggest, most impressive fossils of a dinosaur species for display and ignore the others," said the study's lead author, Holly Woodward, in a statement. "The problem is that those smaller fossils may be from younger animals. So, for a long while we've had large gaps in our understanding of how dinosaurs grew up, and T. rex is no exception."

A model of a Tyrannosaurus-rex predatory dinosaur. (Photo by Christophe Gateau/picture alliance via Getty Images)

T. REX HAD A MASSIVE, STIFF SKULL THAT IT USED TO DEVOUR ITS PREY

It was originally believed that Jane and Petey were a "pygymy" version of the T. rex, known as Nanotyrannus.

Woodward and the other researchers looked at the bone structure of Jane and Petey and counted the annual growth rings in the fossils to determine their age and that they were not a subspecies of T. rex, but rather small teenagers. Woodward added that the discovery will likely aid other paleontologists in learning how the bones and proportions of these massive dinosaurs changed as they grew older.

"To me, it's always amazing to find that if you have something like a huge fossilized dinosaur bone, it's fossilized on the microscopic level as well," Woodward said. "And by comparing these fossilized microstructures to similar features found in modern bone, we know they provide clues to metabolism, growth rate, and age."

Since these were fast dinosaurs, with razor-sharp teeth, the abundance of food was of great importance to their growth rates, Woodward suggested. If food was scarce, its growth levels tapered off and if it was abundant, its growth rate soared.

It's believed that it took up to 20 years for a T. rex to reach full adulthood, adding greater importance to the spacing between the rings in the bones, Woodward continued.

DINOSAURS MAY HAVE BEEN POISONED BEFORE THEY BECAME EXTINCT, STUDY REVEALS

In September, a study was published that suggested the terrifying dinosaur had a stiff skull that allowed it to not shatter its own bones with its bite force, while simultaneously devouring its kill.

In addition to having a stiff skull, T. rex likely had something similar to an "air conditioner" in its head, allowing it to stay cool while hunting, according to a separate study.