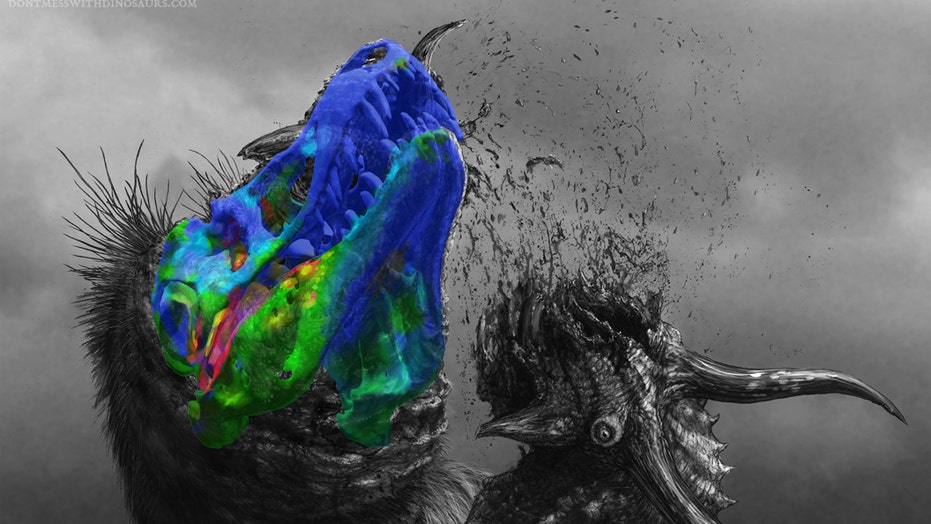 My what a stiff skull you have. The better to eat you with, my dear.

Tyrannosaurus rex, the most fearsome predator to ever walk the Earth, had a bite so hard it was able to shatter the bones of its prey. But a new study notes that the terrifying dinosaur had a stiff skull that allowed it to not shatter its own bones with its bite force, while simultaneously devouring its kill.

The research notes that although birds evolved from dinosaurs and subsequently, the T. rex, the 6-foot-long, 5-foot-wide-skull of the apex predator was more like that of hyenas and crocodiles, stiff and rigid. Previously, paleontologists had believed the skull was flexible, like modern-day birds and snakes.

An artist’s rendition of the Tyrannosaurus rex with the 3D imaging showing muscle activation in its head. Illustration courtesy of Brian Engh.

"Dinosaurs are like modern-day birds, crocodiles and lizards in that they inherited particular joints in their skulls from fish — ball and socket joints, much like people’s hip joints — that seem to lend themselves, but not always, to movement like in snakes," said Casey Holliday, an anatomy expert who participated in the study, in a statement. "When you put a lot of force on things, there's a tradeoff between movement and stability. Birds and lizards have more movement but less stability."

"When we applied their individual movements to the T. rex skull, we saw it did not like being wiggled in ways that the lizard and bird skulls do, which suggests more stiffness," Holliday added.

One of the study's co-authors, Kaleb Sellers, said that T. rex had a bite force of "about 6 tons," adding that previous research did not take into account the relationship between the bones, ligaments and cartilage in the skull.

"Previous researchers looked at this from a bone-only perspective without taking into account all of the connections — ligaments and cartilage — that really mediate the interactions between the bones,” Sellers said.

The researchers used a combination of anatomy and engineering analysis to look at the skull and come up with their hypothesis. They also utilized two of T. rex's present-day relatives, a gecko and a parrot, to make their observations.

T. REX HAD AN 'AIR CONDITIONER' IN ITS HEAD, STUDY SAYS

They also believe that the findings of their study could "advance human and animal medicine by providing better models of how joints and ligaments interact." The study has been published in The Anatomical Record.

In addition to having a stiff skull, T. rex likely had something similar to an "air conditioner" in its head, allowing it to stay cool while hunting, according to a separate study.