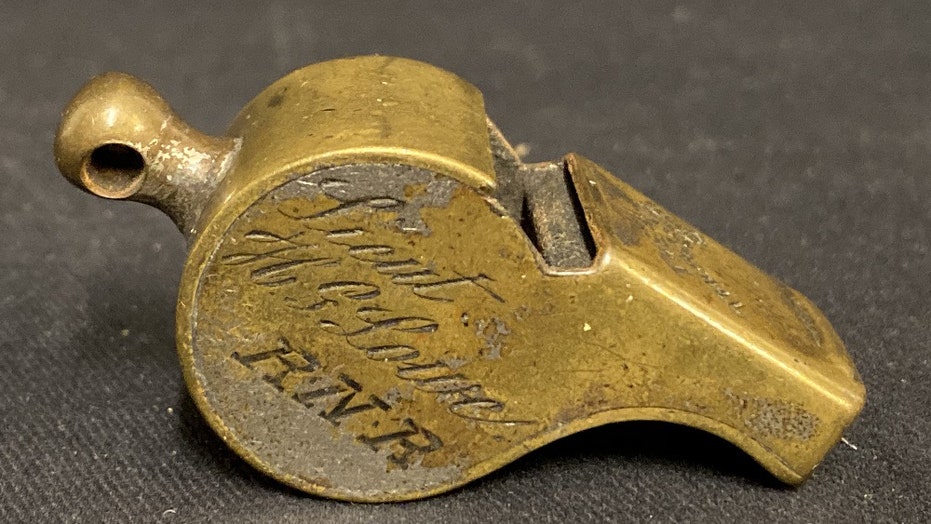 A whistle that belonged to a hero of the Titanic disaster is up for auction in the U.K., along with a host of other artifacts.

The whistle is among a trove of items that belonged to Harold Lowe, a fifth officer on the Titanic.

“Harold Lowe was without doubt one of the heroes of the Titanic disaster,” explained auctioneer Andrew Aldridge of U.K. auction house Henry Aldridge & Son in a statement emailed to Fox News. The archive has been in the possession of Lowe's direct descendants.

Lowe commanded Titanic’s lifeboat 14 and retrieved survivors from the icy waters. The officer, who was born in North Wales, was portrayed by Welsh actor Ioan Gruffudd in James Cameron’s blockbuster Hollywood movie “Titanic.”

The whistle belonged to Harold Lowe, a fifth officer on the Titanic. (Henry Aldridge & Son)

It is not known whether the whistle, engraved with Lieut. H.G. Lowe RNR (Royal Naval Reserve), was used by the officer on the night Titanic sank. “It is unknown if this was the whistle Officer Lowe had on Titanic, however it is without doubt his Officer’s whistle,” explained Aldridge, in the statement emailed to Fox News. The whistle has a pre-sale estimate of $2,526 to $3,788.

Other items in the auction include a photograph of officers on the Titanic rescue ship Carpathia that is signed by the officers,  as well as Carpathia’s captain Arthur Rostron. The photo has a pre-sale estimate of $7,578 to $12,628. The auction takes place on June 20.

A signed photo of leading officers on the rescue ship Carpathia that was owned by Lowe. (Henry Aldridge & Son)