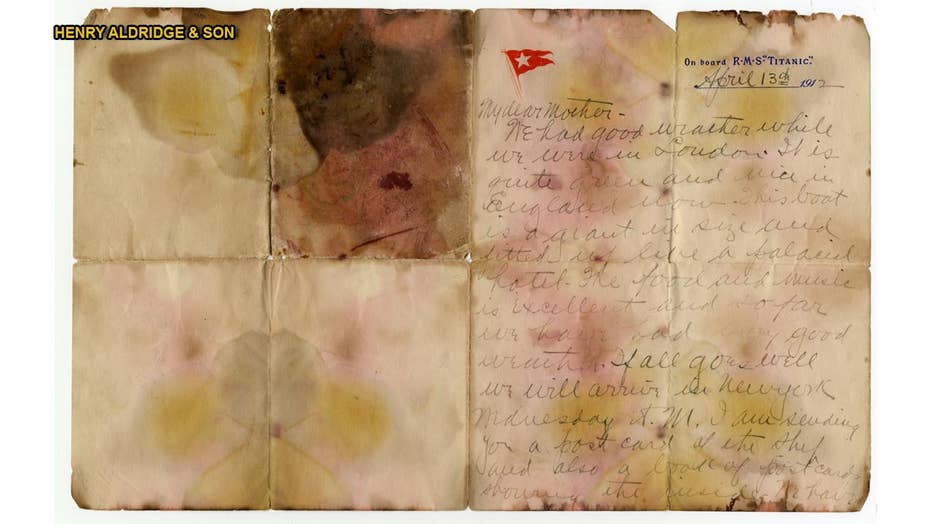 A letter written by Titanic victim Alexander Oskar Holverson has been recovered and will be auctioned in the U.K. for an expected $79,031 to $105,375.

An extremely rare sea-stained letter recovered from the body of a Titanic victim was sold at auction in Britain on Saturday for $166,000.

The letter is one of the last known correspondences to have survived the sinking of the doomed ocean liner, Reuters reported. It was written on Titanic stationery by First Class passenger Alexander Oskar Holverson to his mother on April 13, 1912, when the ship embarked from Southampton, England.

“If all goes well we will arrive in New York Wednesday A.M,” Holverson wrote on the eve of the famous disaster.

Holverson, a Minnesota native, was a salesman traveling with his wife, Mary Alice, who survived the sinking. The letter was apparently found in a pocket book when Holverson’s body was recovered from the Atlantic. It was eventually returned to his family with his other effects.

In his letter, Holverson describes being on the ship with John Jacob Astor, an American financier and real estate investor and one of the ship’s most famous passengers.

"He looks like any other human being even though he has millions of money. They sit out on deck with the rest of us,” he wrote.

Henry Aldridge & Son auctioneer Andrew Aldridge told Fox News in an email Tuesday that he believes it is the most important letter written aboard the Titanic ever to come to market.

The auctioned letter was part of a lot that also included an original photograph of Holverson and his wife leaving for South America prior to their journey on the Titanic, and some unrelated handwritten letters from Holverson’s mother to his brother, Walter.

A number of artifacts from the doomed ship were auctioned in Britain last year, with the sextant used by the captain of rescue ship Carpathia selling for just under $97,000. Three photos and a handwritten note detailing the grisly discovery of the Titanic’s last lifeboat sold for $6,800.