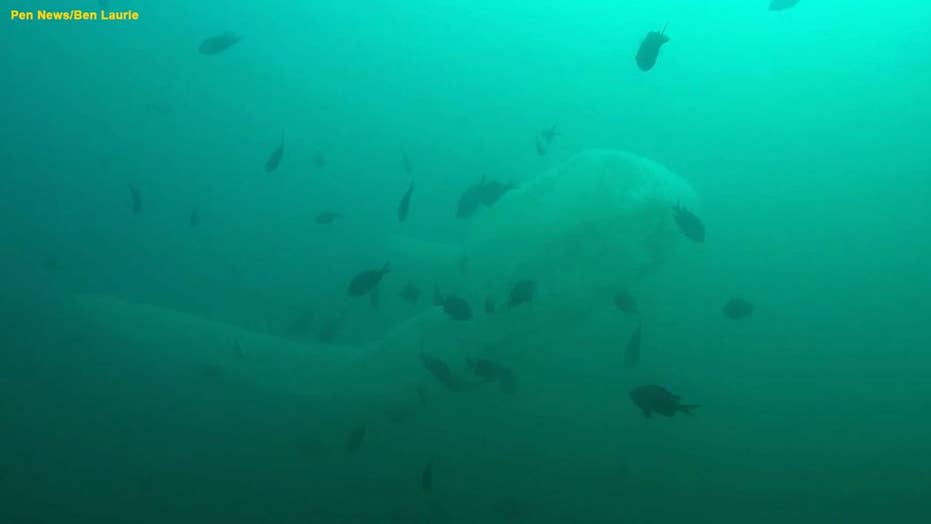 Ben Laurie, 21, encountered a bizarre creature while diving near Cape Brett on New Zealand's North Island. What he thought was a mysterious sea serpent might in fact be a pyrosome, a floating colony comprising billions of sea squirts.

This is the terrifying moment a diver came face to face with a mysterious 30-foot "sea serpent" that resembled a giant condom.

Ben, from Kerikeri, New Zealand, said: "We were diving there for kingfish and we had plugged a couple, and then we were coming up from one of the dives when my friend saw this thing.

"It did look almost like a big condom. It was 10 meters long (approximately 33 feet) and almost half a meter (1.6 feet) wide, and it was just flowing with the tide.”

Ben, who has years of experience in the water and is an ambassador for the WildBlue dive shop, said he had seen nothing like it.

He added: "I didn't know what it was at the time, so it was quite a confusing thing.

"We get these little like plankton build-ups – they're like small stringy things but they're only like 20 cm. (7.8 inches) long – so I thought it was just a large one of them.

"But one of the guys touched it and said it wasn't soft at all, it was more like a cardboard sort of texture."

In fact, the creature is believed to be a pyrosome — a floating colony comprising billions of sea squirts.

It feeds by filtering microscopic plant cells out of the sea, with each squirt drawing in water from outside the pyrosome and then releasing the filtered water inside the colony.

He said: "Apparently they only come from depths of 2,000 meters (approximately 6,500 feet), so it's quite rare for them to be up in the shallows like that.

"It must have been sick or something.

"Once it gets a bit too high, because it's got more of a softer texture, the fish seem to eat it, so that's why it stays deep."

In any case, Ben knows he was lucky to make such a unique sighting.

Ben said that a scientist told him it was “a once-in-a-lifetime rare thing to see.”