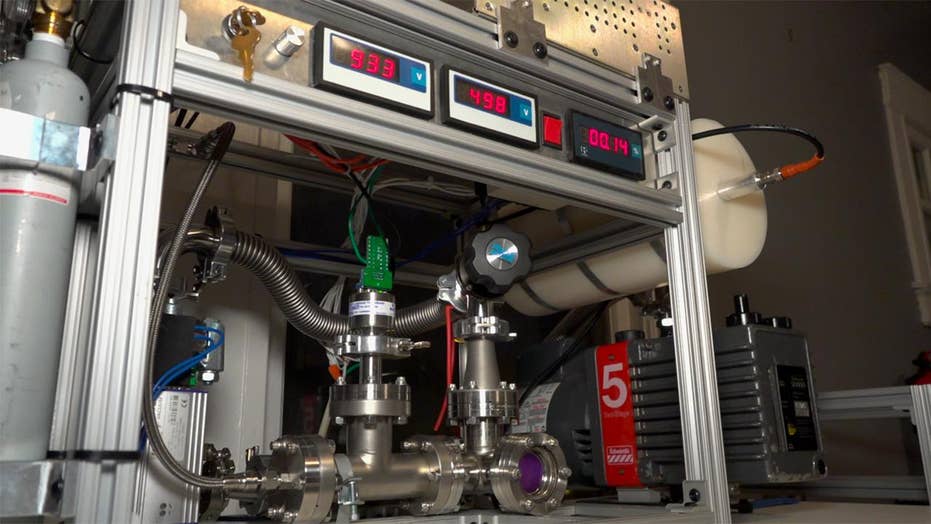 Figuring it out: Tennessee teen successfully builds homemade nuclear fusion reactor on his own.

The Memphis teen finished his reactor and achieved fusion at the age of 13. He’s regarded by experts as the youngest in America – maybe even the world – to accomplish it. Jackson built a steel machine made up of vacuums, pumps and chambers that is capable of smashing atoms together through force in a smoking hot plasma center that releases a burst of fusion energy. If you’ve ever wondered how the sun and other stars are powered, the process within Jackson’s nuclear fusion reactor is comparable.

He began working on the fusion reactor at 12 years old, after concluding that he didn’t want to dedicate his leisure time solely to playing games like Fortnite. He began scouring the Internet for nuclear-related things because that’s what he says held his interest. Yes — at 12 years old.

Jackson Oswalt,14, shows off the sign on the door of his home laboratory warning of X-ray radiation. (Charles Watson/Fox News)

During his research, Jackson came across Taylor Wilson, who in 2008 at 14 years old garnered international recognition as the youngest person to achieve fusion after building a nuclear fusion reactor in his parents’ garage in Texarkana, Ark.

Jackson, like any 12-year-old would, thought he could at least try to beat the record set by Wilson. From there he got to work.

“The start of the process was just learning about what other people had done with their fusion reactors,” explained the mild-mannered teen. “After that, I assembled a list of parts I needed. [I] got those parts off eBay primarily and then often times the parts that I managed to scrounge off of eBay weren’t exactly what I needed. So, I’d have to modify them to be able to do what I needed to do for my project.”

Building the nuclear fusion reactor was no game for Jackson. He converted an old playroom in his Memphis home into a functioning lab. With the financial support of his parents – he spent between $8,000 and $10,000 over the course of a year collecting the parts he needed to build his nuclear fusion reactor – that was apparently the easy part.

Putting the fusion reactor together and testing to see if it worked was the real challenge. Since there isn’t exactly a manual on how to build something like that he relied on trial and error and the Open Source Fusor Research Consortium, an online forum for amateur physicists, to ensure that he was taking the proper steps toward successfully building a fusion reactor and hopefully achieving fusion.

“After a while, it became pretty simple to realize how it all worked together, but at the start it was definitely figuring out one aspect of it, memorizing what that actually meant and then moving on to a different aspect of it,” Jackson said. “Eventually all those pieces of the puzzle came together to make a good project.”

Jackson’s father, Chris Oswalt, had no real understanding of what his son was working on. To make sure Jackson was safe he had experts speak to him about the dangers involved with working on a potentially deadly fusion reactor, like being exposed to high levels of radiation or being electrocuted by the 50,000 volts of electricity he uses to warm the fusion reactor’s plasma core.

Outside of his safety concerns, Chris Oswalt was astonished at what his son was attempting to do.

“Being a parent of someone that was as driven as he was for 12 months was really impressive to see. I mean it was everyday grinding; Everyday learning something different; everyday failing and watching him work through all those things,” he said.

Throughout the process, Jackson posted his results to the Open Source Fusor Research Consortium up until the point when he was able to achieve fusion on Jan. 19, 2018 — hours before his 13th birthday. In Jackson’s case that meant combining two atoms of deuterium gas in the fusion reactor’s plasma core which ejected a neutron into a device that slowed it down and detected nuclear fusion.

“You have to jump through the right hoops, and we have to believe you and see what you’ve done,” said Richard Hull, 72, a verifier with the research consortium and an administrator for its website Fusor.net.

Hull, a retired electronics engineer from Richmond, Va., verified both Jackson’s and Wilson’s results. He now regards Jackson as the youngest in America – possibly the world – to achieve fusion.

THE NUCLEAR BATTLE BETWEEN THE EARTH AND SUN

On a larger scale, scientists have yet to figure out how to produce a nuclear fusion reactor that, like the sun, is able to release more energy than it takes in to power things like homes and buildings.

“We are still far away from making a working nuclear fusion reactor to produce electricity so you can think about how challenging it is to make a fusion reactor,” said Dr. Jingbiao Cui, professor and chair of the Physics department at the University of Memphis.

With a young mind like Jackson interested in becoming a “nuclear engineer working on more projects like this,” scientists could work out the kinks of fusion reactors sooner rather than later.