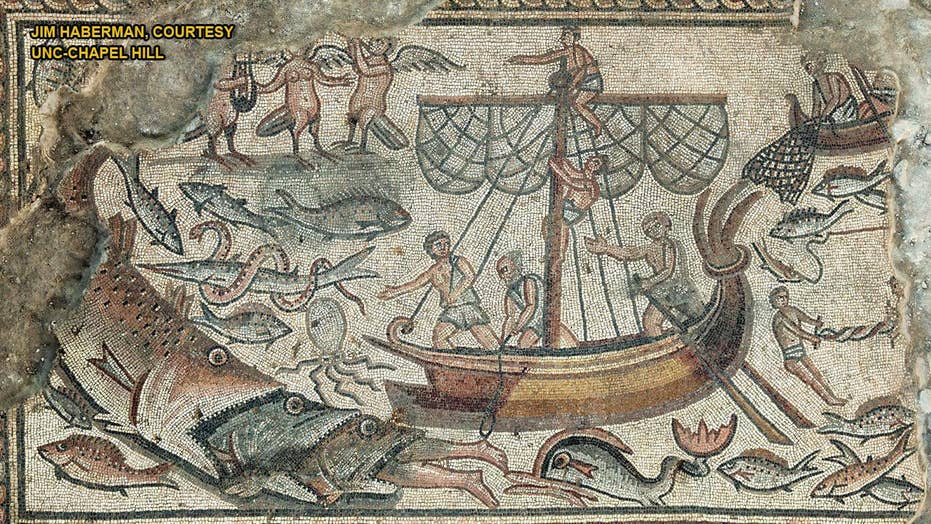 Stunning biblical mosaics revealed in detail for the first time

For the first time, archaeologists have released detailed images of stunning biblical mosaics discovered at the site of an ancient synagogue site in Northern Israel. The mosaics depict Noah's Ark, the parting of the Red Sea, Jonah and the fish and the Tower of Babel.

For the first time, archaeologists have released detailed images of stunning biblical mosaics discovered at the site of an ancient synagogue site in Northern Israel.

The mosaics depict Noah’s Ark, the parting of the Red Sea, Jonah and the fish and the Tower of Babel, according to researchers at the University of North Carolina at Chapel Hill. Portions of the mosaics have been revealed before, but this is the first time the artifacts have been shown in their full glory.

Discovered between 2014 and 2017 at the fifth-century synagogue in Huqoq, the panels paint a fascinating picture of life at the ancient site.

“Although the story of Jonah was popular in early Christian art, this is the first time it has been found decorating an ancient synagogue,” Excavation Director and University of North Carolina at Chapel Hill Professor Jodi Magness told Fox News, via email. “The Huqoq version is unusual in showing three large fish swallowing Jonah, and representing the storm winds (in the upper left corner) as Harpy-Sirens – half-female, half-bird creatures from Greek mythology.”

Magness also notes that the panel depicting the Tower of Babel shows different construction activities around the tower, such as the quarrying of stone, woodworking and the use of a giant pulley. The mosaic provides important evidence for ancient building techniques, she explained.

Additionally, the panel’s depiction of the Tower’s workers is noteworthy. “The workmen have different hairstyles, clothing, and skin colors, to represent the various peoples who participated in the tower’s construction,” Magness said. “A fight is shown breaking out between two of them after God confounded their languages."

Earlier this year, researchers also announced the discovery of a stunning mosaic depicting a biblical scene from Numbers 13:23. Labeled "a pole between two," the panel shows two spies sent by Moses to explore the biblical land of Canaan.

The first mosaics at the site were discovered in 2012. Experts say that the wealth of mosaics show that Jewish life in the surrounding village flourished during Christian rule in the fifth century A.D. This challenges a widely held view that Jewish settlement in the area declined during that period.

Another mosaic discovered at Huqoq includes a depiction of Samson. There is also an ongoing debate about whether a mosaic uncovered in 2016 portrays Alexander the Great. The purported Alexander the Great mosaic is the first non-biblical story ever found decorating an ancient synagogue.

The researchers’ latest study is featured in the Bulletin of the American Schools of Oriental Research.

The Huqoq Excavation Project involves experts from a host of universities, including Baylor University, Brigham Young University and the University of Toronto. Magness has been working with Shua Kisilevitz of the Israel Antiquities Authority and Tel Aviv University on the excavations every summer.

The mosaics are the latest in a series of fascinating archaeological finds in Israel. In a separate project, engravings of ships were found on an ancient water cistern discovered in Israel's Negev desert.

Previously, only portions of the mosaics were released, such as this one from the Noah's Ark panel. (Jim Haberman, Courtesy UNC-Chapel Hill)

In another project, experts discovered a site that may offer fresh insight into the ancient biblical kingdom of David and Solomon. In a separate archaeological dig, a trove of bronze coins, the last remnants of an ancient Jewish revolt against the Roman Empire, were recently discovered near the Temple Mount in Jerusalem.

Other recent finds include the skeleton of a pregnant woman, dating back 3,200 years, in Israel’s Timna Valley, at a place once called King Solomon’s Mines.