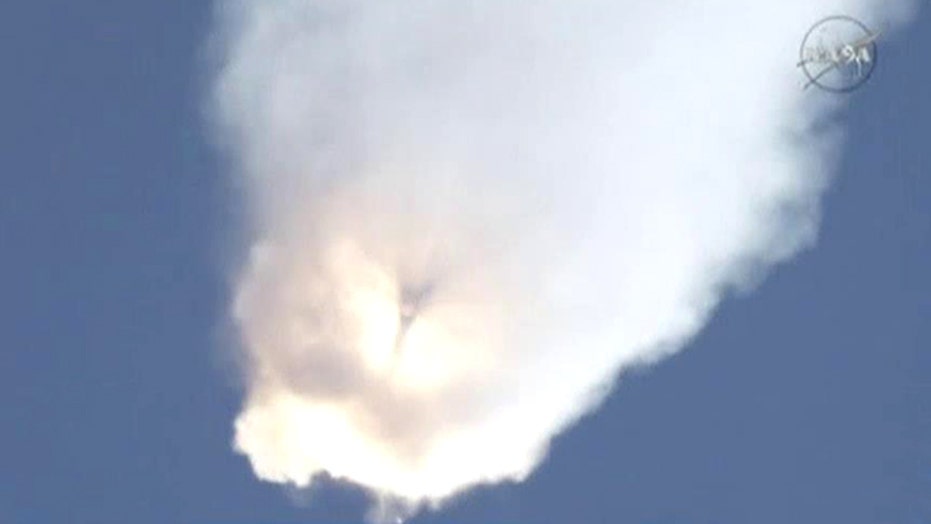 The disintegration of a SpaceX Falcon 9 rocket shortly after it launched on a space station resupply mission for NASA last month was most likely caused by a faulty strut inside the booster's upper stage, company CEO and founder Elon Musk said Monday.

SpaceX investigators believe the explosion of the Falcon 9 rocket on June 28 during a launch to the International Space Station occurred because a steel strut holding down a bottle of high-pressure helium snapped during ascent. This failure allowed the bottle to shoot to the top of the booster's upper-stage liquid-oxygen tank at high speed, causing a rapid "overpressure event" that destroyed the rocket, Musk told reporters during a teleconference. (Somewhat counterintuitively, buoyancy increases with g-forces during a launch, explaining why the bottle would travel up, Musk said.)

Every Falcon 9 launches with hundreds of such struts aboard, Musk said. Both stages of the two-stage rocket harbor many bottles that store helium at cryogenic temperatures. During flight, this helium flows to the engines, where it is warmed; the substance is then recirculated to the booster's liquid-oxygen and fuel tanks to repressurize and structurally stabilize them, compensating for the volume of fuel and oxidizer lost during flight. [The Falcon 9 Explosion in Slow Motion (Video)]

The roughly 2-foot-long struts hold these bottles in place. Each strut is certified to withstand about 10,000 lbs. of force. Based on when the explosion happened — less than 3 minutes after liftoff — the strut in question apparently broke under a load of less than 2,000 lbs., Musk said.

"It's not something that should have ever failed at this force level," he said. The strut "would appear to be incorrectly made, but there was no visible way of telling that from the outside."

SpaceX sources these struts from an outside company and will probably change suppliers now, Musk added. In addition, SpaceX plans to individually test and certify every strut that will fly, to ensure that no faulty ones make it on board, he said.

This assessment of the Falcon 9 rocket failure is preliminary rather than definitive, Musk said, stressing that the investigation of the mishap is ongoing.

Still, he added, "right now, there doesn't seem to be any other explanation that could make sense."

The Falcon 9 launched from Florida's Cape Canaveral Air Force Station on June 28 carrying SpaceX's robotic Dragon space capsule on the company's seventh contracted cargo mission to the space station. SpaceX holds a $1.6 billion NASA deal to make at least 12 such flights; the first six missions had all been completely successful.

The explosion did not destroy Dragon, and the capsule continued sending data back to mission control until it disappeared over the horizon, Musk said. The company has retrieved some pieces of floating Dragon debris from the Atlantic Ocean, but most of the capsule is apparently sitting on the seafloor. SpaceX aims to send a robotic submarine to the presumed crash site soon in an attempt to locate the spacecraft.

Dragon would almost certainly have survived the incident intact if its onboard software had been geared to allow parachute deployment so early in the flight, Musk added. (Dragon cargo capsules make parachute-aided ocean splashdowns after completing their missions.) [The Rockets and Spaceships of SpaceX (Photos)]

"That is probably the saddest thing about this, is that, if there was just a bit of different software, Dragon would have made it," Musk said, adding that such software will be installed in time for the next cargo mission.

However, when that next flight will take place is unclear at the moment. The next SpaceX launch will come no earlier than September, Musk said, and he's not sure what the payload will be when the company returns to flight.

The delay and decrease in flight rate resulting from the mishap will probably end up costing SpaceX hundreds of millions of dollars, Musk added. In addition, the ongoing focus on the Falcon 9 will likely push the highly anticipated first flight of the company's huge Falcon Heavy booster into spring 2016 at the earliest.

SpaceX is also developing a manned version of Dragon, which NASA will use (along with Boeing's CST-100 capsule) to fly astronauts to and from the space station. The manned version of Dragon, which is equipped with an escape system to get the capsule out of harm's way during a launch emergency, would have survived the June 28 accident, Musk said, adding that he doesn't anticipate any delays in the crew-carrying spacecraft's development. (NASA wants the two private astronaut taxis to be up and running by 2017.)

The June 28 Falcon 9 explosion was the third failure of a robotic cargo mission to the space station in less than a year. In October 2014, Orbital ATK's Antares rocket blew up seconds after lifting off, ending the company's third resupply run for NASA under a $1.9 billion deal. And in May, Russia's Progress 59 spacecraft fell back to Earth without reaching the space station, victimized by a problem with the third stage of its Soyuz rocket.

"Each one of these failure modes has been quite different," Elon Musk said. "It just goes to show — rockets are a fundamentally difficult thing."