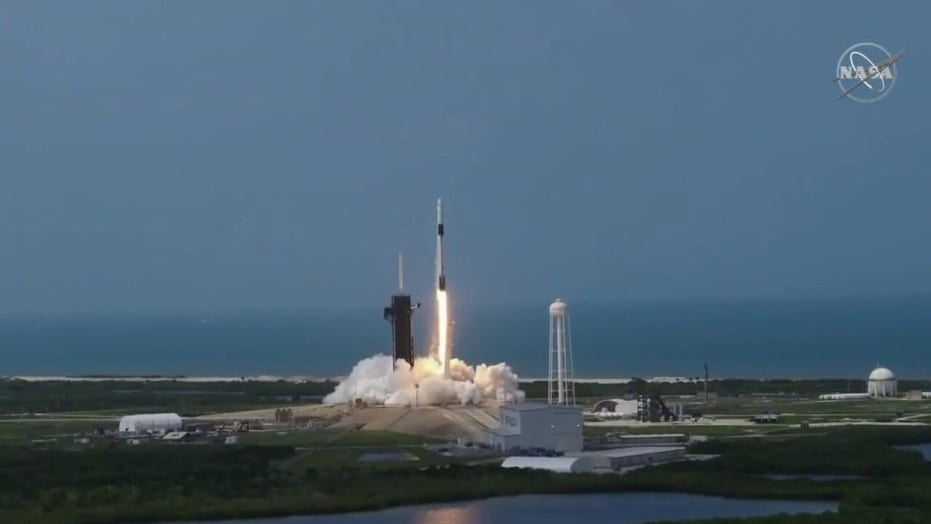 NASA astronauts blast off into space on a SpaceX rocket bound for the International Space Station.

SpaceX has launched NASA astronauts Doug Hurley and Bob Behnken on their historic Demo-2 mission to the International Space Station (ISS). The mission is the first time that astronauts have launched from American soil since the final Space Shuttle flight in 2011.

Hurley and Behnken blasted off from Kennedy Space Center’s historic launch pad 39A, which was also used for the Apollo and space shuttle programs, at 3:22 p.m. ET Saturday. An attempt on Wednesday was scrubbed due to weather conditions.

The launch is the first time a private company, rather than a national government, has sent astronauts into orbit.

There were concerns that bad weather would force Saturday's launch to be scrubbed, but the mission was able to proceed as planned. President Trump and Vice President Pence, who is chairman of the National Space Council, watched the launch from Kennedy Space Center.

The SpaceX Falcon 9 rocket launches into space from Kennedy Space Center with NASA astronauts Bob Behnken and Doug Hurley aboard the Crew Dragon spacecraft on May 30, 2020. (Photo by Saul Martinez/Getty Images)

"With this launch, the decades of lost years and little action are officially over," he said. The names of Hurley and Behnken, he added, will stand in the history books alongside the likes of Mercury and Gemini astronaut Gus Grissom.

Launched atop a SpaceX Falcon 9 rocket, Hurley and Behnken are traveling to the International Space Station in a Crew Dragon spacecraft built by the space company.

After separation, the Falcon 9 booster successfully returned to Earth, landing on a drone ship in the Atlantic.

NASA astronauts Bob Behnken (R) and Doug Hurley sit in a Tesla vehicle after walking out of the Operations and Checkout Building on their way to the SpaceX Falcon 9 rocket with the Crew Dragon spacecraft on launch pad 39A at the Kennedy Space Center on May 30, 2020 in Cape Canaveral, Florida. (Photo by Joe Raedle/Getty Images)

"Today was just an amazing day," NASA administrator Jim Bridenstine said shortly after the launch. "I can breathe a sigh of relief but I can also tell you that I'm not going to celebrate until Bob and Doug are home safely."

Bridenstine said he was praying for the astronauts during the liftoff. "I have heard that rumble [of a rocket launch] before, but it's a whole different feeling when you've got your own team on that rocket."

Under normal circumstances, large crowds would have been expected to witness the historic launch but, citing concerns about the coronavirus pandemic, NASA urged people to stay away.

A SpaceX Falcon 9, with NASA astronauts Doug Hurley and Bob Behnken in the Crew Dragon capsule, sits on Launch Pad 39-A at the Kennedy Space Center in Cape Canaveral, Fla., Saturday, May 30, 2020. (AP Photo/David J. Phillip)

NASA recently agreed to pay Russian space agency Roscosmos $90 million for one final seat on one of its Soyuz rockets.