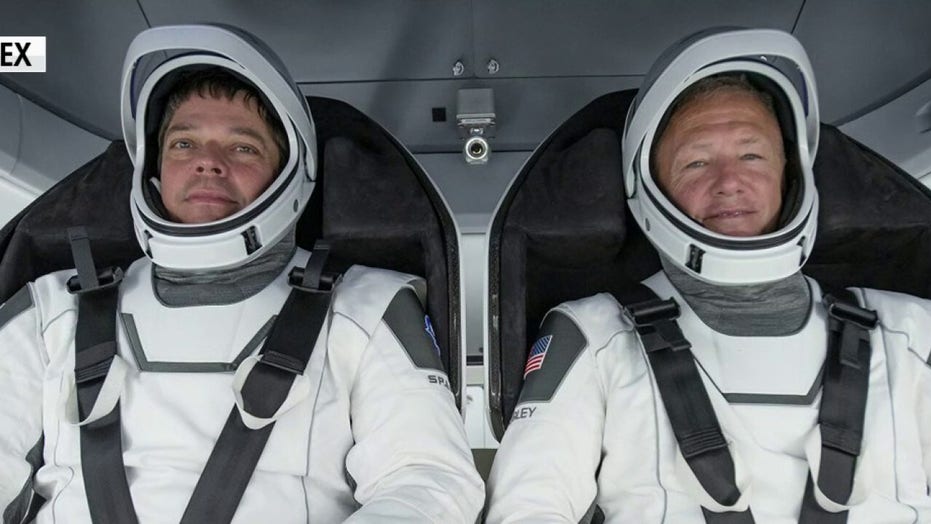 The launch from Kennedy Space Center will be the first time in a decade that NASA astronauts will head to space from U.S. soil.

On May 27, NASA astronauts Doug Hurley and Bob Behnken are scheduled to launch from Kennedy Space Center in a SpaceX Crew Dragon spacecraft, becoming the first Americans to head into space from U.S. soil since 2011.

Part of NASA’s Commercial Crew Program, Crew Dragon will launch atop one of SpaceX’s Falcon 9 rockets from the historic pad 39A, which was also used for the Apollo and space shuttle programs. The launch is scheduled for 4:33 p.m. EDT.

It will be the first time a private company, rather than a national government, sends astronauts into orbit.

Workers near the top of the 526 ft. Vehicle Assembly Building at the Kennedy Space Center spruce up the NASA logo standing on scaffolds in Merritt Island, Fla., Wednesday, May 20, 2020. (AP Photo/John Raoux)

“Launching astronauts from American soil is huge,” he told Fox News during an interview. “It really is a very historic time, it’s unfortunate that we’re doing it during the pandemic.”

Under normal circumstances, large crowds would have been expected to witness the historic launch but, citing concerns about the coronavirus pandemic, NASA has urged people to stay away. Hundreds of thousands of people flocked to the area near Kennedy Space Center for the last shuttle launch in July 2011, according to Spaceflight Now.

Massimino told Fox News that he had received an invite to the Demo-2 launch, but, amid the coronavirus restrictions, will be following the event remotely. “I was invited to go as a guest of the crew and family, but I can’t go,” he added.

NASA astronauts Bob Behnken, left, and Doug Hurley wave as they leave a news conference after they arrived at the Kennedy Space Center in Cape Canaveral, Fla., Wednesday, May 20, 2020. (AP Photo/John Raoux)

Nonetheless, he thinks that the launch will be an uplifting event at a time when millions are struggling with the impact of the pandemic. “It’s always good timing for a shot of inspiration and good news,” he said. “People may be inclined to pay attention because they are home and online.”

The former astronaut, who is now a professor at Columbia University’s School of Engineering, will be providing commentary on the launch for “Space Launch Live: America Returns to Space” on the Discovery and Science Channels on May 27. He will also be discussing the mission in the Intrepid Air, Sea and Space Museum’s Virtual Astronomy Live event on Thursday at 3:30 p.m. ET.

Launched atop the Falcon 9 rocket, Crew Dragon will accelerate to approximately 17,000 mph, according to NASA, placing the capsule on course for the International Space Station.

Massimino told Fox News that the crewed flight of the new spacecraft is an important step forward for the U.S. space program.

“I am really, really excited, it’s something that we have been thinking about for a long time – even before we had the shuttle accident with Columbia, we had been thinking about another vehicle,” he explained. “This is a great step in the right direction, this Commercial Crew program.”

Hurley and Behnken flew to Kennedy Space Center on Wednesday, exactly one week before their historic SpaceX flight.

Massimino said that, as the astronauts make their final preparation for their journey into space, he can’t help but think about his own time in orbit. “I miss it, I miss it all the time, I really do – I think that’s somewhat human nature. I think it’s important in life, particularly for astronauts, to be grateful for what we had the chance to do. I am very happy that I had these opportunities, so I am very happy for these guys.”

Last week, NASA agreed to pay Russian space agency Roscosmos $90 million for one final seat on one of its Soyuz rockets.