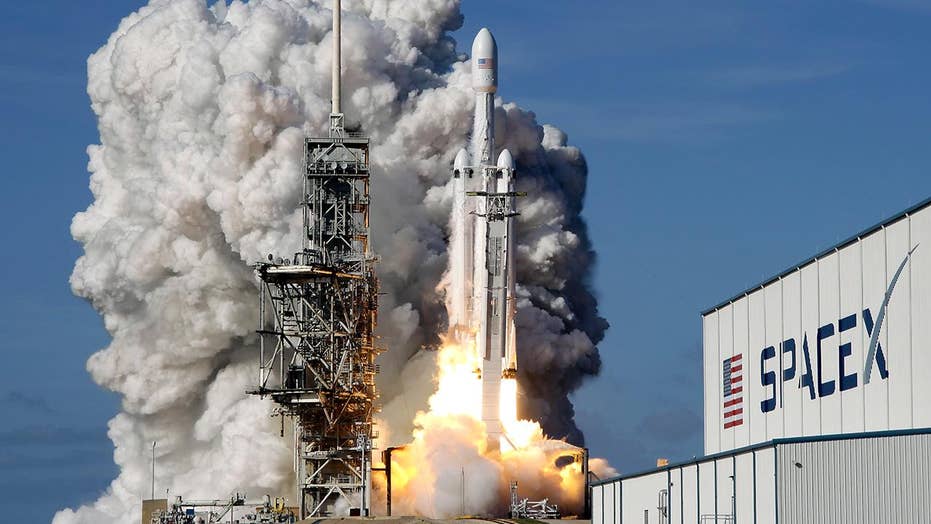 The Falcon Heavy launch was heralded as a major success for Elon Musk’s private space company. The new, larger rocket is designed to hoist supersize satellites as well as equipment to the moon, Mars or other far-flung points.

“This is a tremendous accomplishment by the SpaceX team and a great day for space exploration,” commented Explore Mars CEO Chris Carberry, in a statement. “With this launch and other heavy lift vehicles slated to be launched in the upcoming years, we are truly on the verge the golden age of space exploration.”

Explore Mars is a non-profit organization that aims to advance the goal of sending humans to Mars within the next two decades. “SpaceX has announced bold plans to send people to the planet Mars in the 2020s,” the organization added in its statement. “Today’s successful launch of the Falcon Heavy is yet another step forward on that journey.”

Apollo 11 astronaut Buzz Aldrin, the second man on the Moon, was among the thousands of people that flocked to Cape Canaveral to witness the launch.

“Liftoff! We have liftoff on the #falconheavy Congratulations @SpaceX,” he tweeted Tuesday, with a picture of the rocket blasting into the clear Florida skies.

NASA also praised Musk’s SpaceX. "All of us in this business know the effort it takes to get to a first flight...and recognize the tremendous accomplishment we witnessed today,” said NASA’s Acting Administrator Robert Lightfoot, in a tweet sent out by the space agency.

President Trump congratulated Musk and SpaceX in a tweet on Tuesday evening. “Congratulations @ElonMusk and @SpaceX on the successful #FalconHeavy launch. This achievement, along with @NASA’s commercial and international partners, continues to show American ingenuity at its best!”

SpaceX also won plaudits from its rivals, such as Boeing, which is working with NASA to develop the powerful Space Launch System rocket for Moon and Mars exploration.

“SpaceX’s successful launch today has pushed our industry to go further faster. Boeing will soon launch our own new rocket intended to take humans to Mars and beyond. Congratulations @SpaceX for your contribution to help innovate, compete, and explore.”

Tory Bruno, the CEO of United Launch Alliance, which builds the rival Delta IV Heavy rocket, also congratulated Musk and SpaceX in a tweet, as did Jeff Bezos, CEO of Blue Origin.

SpaceX describes the Falcon Heavy as “the most powerful operational rocket in the world by a factor of two.” The rocket can lift a payload of 64 metric tons (141,000 pounds) into orbit, which is more than twice the payload of the Delta IV Heavy, at one third of the cost, according to SpaceX.

MUSK'S TESLA HAS A NEW ORBIT, AND ITS HEADED FOR THE ASTEROID BELT

Falcon Heavy can carry a mass greater than a 737 jetliner loaded with passengers, crew, luggage and fuel into orbit, the company says.

However, the test flight carried a much lighter, yet highly unusual cargo - a red sports car made by another of Musk's companies, Tesla, enclosed in a protective covering for the launch.

Incredible video footage later showed the car and its dummy driver “Starman,” in orbit. A sign on the dashboard read: "Don't panic!" (a reference to Musk's favorite book, "The Hitchiker's Guide to the Galaxy") and David Bowie's "Life on Mars?" played in the background at one point. A Hot Wheels roadster was also on the dash with a tiny spaceman on board.

“View from SpaceX Launch Control. Apparently, there is a car in orbit around Earth,” tweeted Elon Musk.

Late Tuesday, Musk tweeted that his Roadster had exceeded Mars orbit and was toward the asteroid belt.

Stunning footage also showed two of the SpaceX boosters used for the launch landing back at Cape Canaveral. The boosters — both recycled from previous launches — returned minutes after liftoff for on-the-mark touchdowns. Sonic booms rumbled across the region with the vertical landings.

Musk later revealed the third booster, brand new, slammed into the Atlantic at 300 mph and missed the floating landing platform, scattering shrapnel all over the deck and knocking out two engines.

SpaceX is committed to a strategy of returning its boosters to Earth in an attempt to reduce the costs of spaceflight.

Such was the level of interest in Tuesday’s launch that the test flight was the second biggest live stream in YouTube’s history (second to the Red Bull Stratos Jump), with more than 2.3 million concurrent views. It also led nightly news reports, signifying the achievement.

The Associated Press and Fox News’ Chris Ciaccia and Phil Keating contributed to this article.