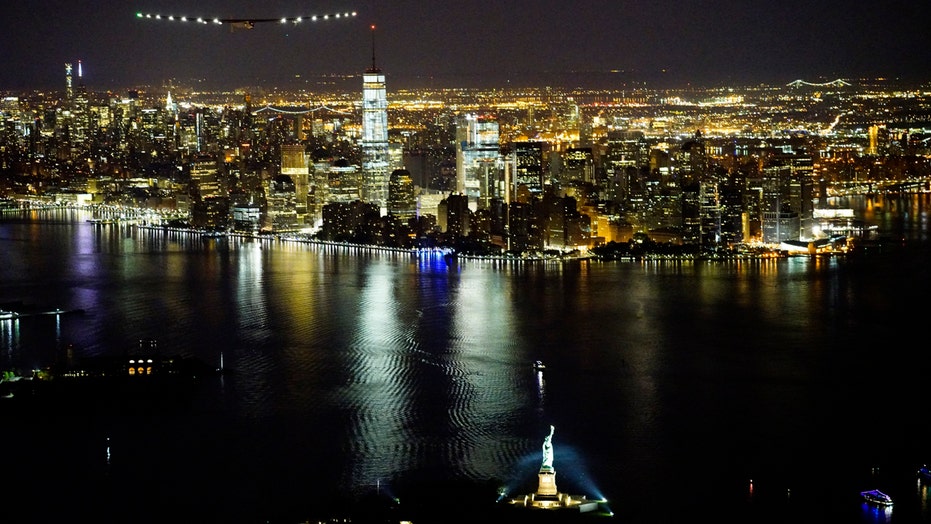 Solar Impulse 2 arrived in New York City early Saturday to complete the latest leg of its epic zero-fuel journey around the world.

The solar-powered plane took off from Lehigh Valley, Pennsylvania after 11 p.m. ET Friday and performed a spectacular flyby of the Statue of Liberty during a 5-hour flight to JFK airport.

“This flight over #Statueofliberty symbolizes US values - liberty of pioneers, liberty to explore, liberty to invent,” tweeted pilot Andre Borschberg, while flying over the iconic statue in New York harbor.

This flight over #Statueofliberty symbolizes US values - liberty of pioneers, liberty to explore, liberty to invent pic.twitter.com/2DYDBCzwZs

“The #StatueofLiberty welcomes travellers, flying over it now we pay tribute to the special welcome we received here,” he added, in another tweet.

The #StatueofLiberty welcomes travellers, flying over it now we pay tribute to the special welcome we received here pic.twitter.com/84vdGrNXN1

Solar Impulse 2 was originally scheduled to arrive in New York Tuesday but the flight was postponed due to bad weather.

Borschberg’s flight marked the 14th leg of Solar Impulse 2’s attempt to circumnavigate the globe. The plane has travelled 18,540 miles since setting off from on the first leg of the trip from Abu Dhabi to Oman in March 2015, and has racked up almost 390 hours of flight time.

The plane is the brainchild of explorer and Solar Impulse Chairman Piccard, who is taking it in turns with his fellow Swiss pilot Borschberg to fly the aircraft on its journey across the globe.

Solar Impulse 2 proves the immense potential of solar-powered technology, according to Piccard. The plane, he told FoxNews.com last year, could spark increased interest in technologies such as LED lights and electric cars, as well as lightweight vehicles.

“We received very positive and heartwarming responses during our journey through the United States, because it’s a country of pioneers and explorers,” said Piccard, in a statement Saturday. “It’s amazing to see to what extent people understand not only what we do, but also why we do it: to show that if we all used the same clean technologies as Solar Impulse on the ground we could create jobs, enhance profits and boost economic growth, while also protecting the environment.”

The aircraft, a larger version of a single-seat prototype that first flew six years ago, is made of carbon fiber and has 17,248 solar cells built into the wing that supply the plane with renewable energy, via four motors. The solar cells recharge four lithium polymer batteries, which provide power for night flying.

Solar Impulse 2 typically flies between 30 mph and 40 mph, although this can increase and decrease significantly depending on wind speed.

Prior to its arrival in Lehigh Valley, Solar Impulse 2 made stops in India, Myanmar, China, Japan, Hawaii, California, Phoenix, Tulsa and Dayton. From New York, the plane will fly across the Atlantic Ocean to Europe. The final leg of the odyssey is from Europe to Abu Dhabi.

The Solar Impulse team praised New York’s efforts around renewable energy in a blog post earlier this week. “It’s not a surprise that innovation reigns in New York City and that people use creativity to integrate sustainability in their enterprises,” it said.

According to a 2015 report from the New York State Energy and Research and Development Authority (NYSERDA) companies, universities and government labs in the state have the second-largest budget for electric and gas efficiency and gas efficiency ($889 million in 2014) compared to other states. New York state also has a vibrant clean energy market, ranking fifth nationally in total renewable energy consumption.