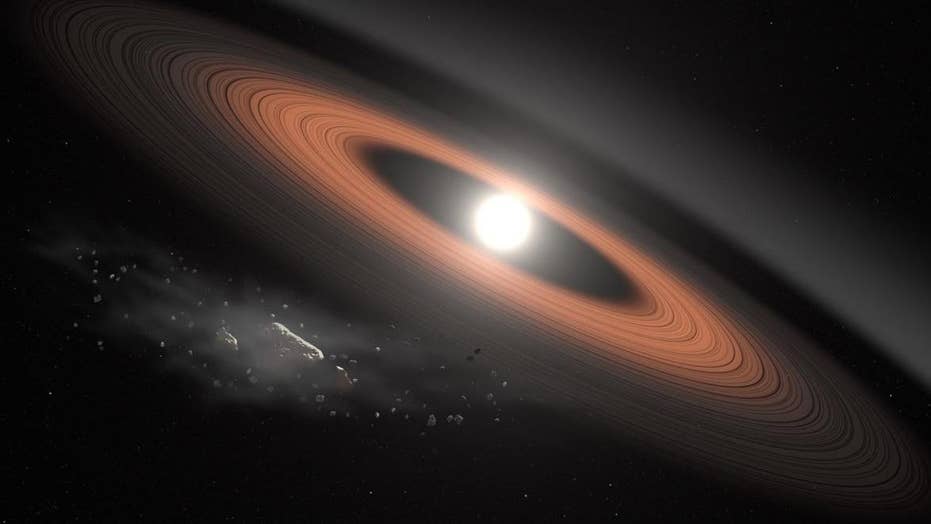 While searching for Planet Nine, a scientist discovered an ancient star with mysterious rings circling it.

The hunt for Planet Nine has so far eluded researchers, but one citizen scientist working on a project to find the evasive celestial body has found something just as remarkable – a 3-billion-year-old dwarf star that has dust rings circling it.

German citizen scientist Melina Thévenot made the discovery while working on the NASA-led Backyard Worlds: Planet 9 project. Known as LSPM J0207+3331 or J0207, the ancient dwarf star was originally thought to be a cold brown dwarf, Adam Schneider, a research scientist at Arizona State University said, but it ultimately proved to be something more.

"When Melina investigated further, she found that although the object had significant infrared brightness; it was not a nearby brown dwarf," Schneider said in a statement. "The team looked at it together, and we determined it was likely a white dwarf with infrared excess."

MORE PLANET NINE EVIDENCE? FAROUT IS THE FARTHEST OBJECT IN THE SOLAR SYSTEM EVER FOUND

The rings are likely made up of warm dust, made up of the near continuous breakup of other "small rocky planetesimals" orbiting the dwarf, the statement said. However, due to the age of J0207 and its cold temperature, the rings remain a mystery.

"Curiously, the mid-infrared photometry of the disk cannot be fully explained by a geometrically thin, optically thick dust disk as seen for other dusty white dwarfs, but requires a second ring of dust near the white dwarf's Roche radius," the study's abstract reads.

The study was published in the Astrophysical Journal Letters.

White dwarf expert John Debes, an astronomer at the Space Telescope Science Institute in Baltimore, said that whatever is feeding the material into the rings is operating on "billion-year timescales."

"Most of the models scientists have created to explain rings around white dwarfs only work well up to around 100 million years, so this star is really challenging our assumptions of how planetary systems evolve," Debes said.

It's also possible that there may be more than "one distinct ring-like component" as part of the J0207 disk, which has never been seen before with a white dwarf, leading scientists to wonder how it fits into everything that has been previously known about white dwarfs.

More research is needed, some of which will use NASA's James Webb Space Telescope, to determine exactly what the ring is comprised of.