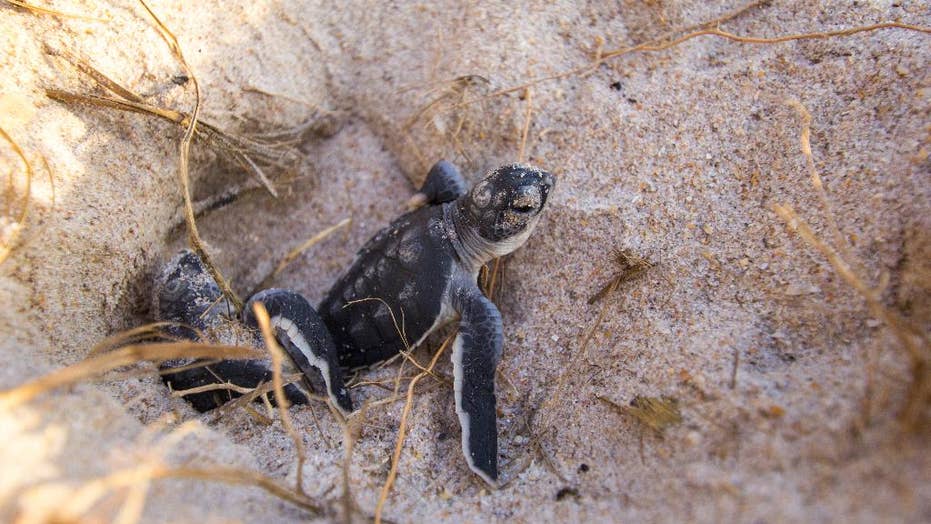 Rescued sea turtles returned to the ocean on Florida beach

Following months of care, the SeaWorld Rescue team has returned five sea turtles to the ocean at Pineta Beach, Fla.

With the sea turtle hatching season in full swing, experts are warning of the massive threat that bright lights and camera flashes pose to the baby turtles as they attempt to reach the ocean.

“Sea turtle hatchlings are biologically programmed to emerge on a dark, quiet beach, look for the brightest horizon and head toward the water,” a spokeswoman for the Florida Fish and Wildlife Conservation Commission told Fox News, via email. “If hatchlings are making their way toward the water, any interference or disturbance by people – even just folks on the beach looking for sea turtles -  such as getting too close or taking flash photos, increases the chances the hatchlings will get confused, go in the wrong direction and not reach the ocean quickly.”

If sea turtles head in the wrong direction they become vulnerable to dehydration, exhaustion and predators, according to officials. “The hatchlings head for the bright lights thinking they are the sparkling sea, and end up walking landward, where they may become prey for raccoons, coyotes and other animals or get run over on roads,” they added.

In Wrightsville Beach, N.C., volunteers fear that over 100 baby sea turtles were recently lost after they mistook artificial lighting for the moon after hatching, the Wilmington Star News reports.

“Because there is no way for us to know when a sea turtle nest will hatch, this sometimes happens when no volunteers are present,” explained the Wrightsville Beach Sea Turtle Project, in a Facebook post on Aug. 12. “In this case, the tracks from the hatchlings show that they all walked toward the brightest lights nearby, the lights on the pier, making them easy prey for crabs and birds.”

The Florida Fish and Wildlife Conservation Commission urges people to refrain from taking flash photos of hatchlings, whether with a cell phone or camera. “Do not shine flashlights on hatchlings or try to guide them to the water. Remember, even red lights can impact nesting and hatchling sea turtles – they are just less of an impact than white lights,” it adds.

Three species of threatened or endangered sea turtles – Loggerhead, Green and Leatherback – nest frequently in Florida, according to officials. Kemp’s Ridley and Hawksbill turtles nest in the state much less frequently.

“Leatherback sea turtles start nesting early in the spring on Florida’s mid-Atlantic coast: nesting season in this area (Brevard through Broward County) begins March 1,” the Florida Fish and Wildlife Conservation Commission told Fox News. “Loggerhead turtles nest in every coastal county on the Atlantic and Gulf of Mexico, and nesting season in these counties begins May 1.”

Maggie Mariolis, a senior animal care specialist and member of the rescue team at SeaWorld Orlando, notes that Florida is one of the most important Loggerhead turtle sanctuaries in the Western Hemisphere. “Some years we will see 15,000 female turtles coming ashore to lay their eggs,” she said.

Officials note that hatching varies by species and location.

Mariolis told Fox News that Sea World’s sea turtle rescue program works with officials to care for hurt turtles and eventually return them to the ocean. “Most of the turtles that come here to us are going to have some sort of injury,” she said. “This year, we had quite a few juvenile green sea turtles come in.”

On Tuesday, the SeaWorld rescue team returned five turtles to the ocean at Pineta Beach, Fla. Four of the turtles were juvenile Green Sea turtles and the fifth was a Kemps Ridley turtle. So far this year, the team has rescue 31 sea turtles and returned 34 turtles back to the ocean.