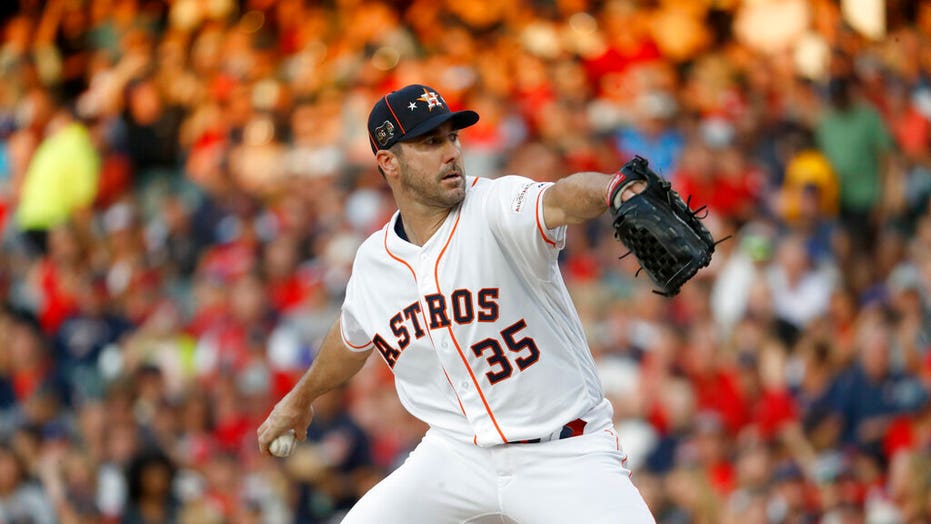 This season has seen a surge in home runs, sparking complaints from a number of pitchers that the baseballs are juiced, an allegation that Major League Baseball denies. Scientists, however, are searching for the reasons behind the home run onslaught.

Lloyd Smith, a professor at Washington State University's School of Mechanical and Materials Engineering, is part of a team of experts specializing in physics, mechanical engineering, statistics and mathematics brought in by Major League Baseball to find answers to the home run surge. A May 2018 report by the group concluded there was less drag on the ball, causing more home runs.

"Our independent committee determined that the increase in home run rate through the 2017 season was primarily caused by a change in the drag properties of the baseball, resulting in better 'carry' on fly balls," Smith told Fox News, via email.  "However, at that time we were unable to determine the cause of the change in drag."

DEFLATE-GATE: THE SCIENCE OF UNDERINFLATED FOOTBALLS

Batters have hit 5,357 home runs so far this season, according to Baseball Reference and should easily surpass the 5,558 homers that were hit last year. The record for a single season was 6,105 in 2017 and, in 2000, at the height of the Steroids Era, 5,693 round-trippers were hit.

MLB Commissioner Rob Manfred has denied accusations by Houston Astros ace and A.L. All-Star starter Justin Verlander and other pitchers that baseballs have been deliberately altered.

"It's a f---ing joke," Verlander told ESPN in an interview prior to the All-Star Game, slamming Manfred and MLB's ownership of baseball manufacturer, Rawlings. "If any other $40 billion company bought out a $400 million company and the product changed dramatically, it's not a guess as to what happened. We all know what happened. Manfred, the first time he came in, what'd he say? He said we wants more offense. All of a sudden he comes in, the balls are juiced? It's not coincidence. We're not idiots."

In a recent interview on ESPN's Pardon the Interruption, Verlander expanded upon his initial concerns about the balls. “Any guys that have been playing this game for a period of time now understand that something is a little different and that is kind of where I’m coming from,” he said. “I just wish that all the information was out there.”

Speaking to the Baseball Writers Association of America during the All-Star Game festivities on July 9, Manfred addressed the concerns about the balls. “Baseball has done nothing, given no direction for an alteration in the baseball,” he said.

Manfred, however, acknowledged the issue of less drag on the baseballs and said that MLB is analyzing the balls. “The pitchers have raised issues about particularly the tackiness and the seams on the baseball,” he said. “And we do believe that those are issues that are related to the performance of the ball we're trying to get our hands on.”

When Fox News reached out to MLB with a request for comment on this story, the organization referred us to Manfred's comments to the BBWA. Rawlings told Fox News that it hasn't changed anything in its manufacturing process. "It's a manmade product," a spokesman explained. "They are hand-sewn, one at a time."

MLB has commissioned laser tests to measure seam width and height. Manfred said that if causes of the decreased drag are found, it is possible the ball's specifications could be changed to decrease homers.

Smith told Fox News that, as part of their research, scientists have had to develop new methods and instrumentation to measure the properties of the ball with improved precision. "The effects we are trying to measure are extremely subtle," he said. "We think it best not to comment further on our investigations until the work is complete."

Brian Love, a professor of materials science and engineering at the University of Michigan, who is not involved in the committee set up by MLB, told Fox News that a number of factors could be contributing to the home run surge. “It could be some granular detail like a thicker thread that makes pulling seams more taut,” he explained, via email. “It could be some marginal improvement in centering the pill [the baseball’s core] or in storing the ball in climate-controlled rooms that probably dehydrate the ball relative to ambient humidity.”

Additionally, Love notes that players could also be contributing to the surge. “It could be pitchers are using the heater more and when contact is made, the ricochet is stronger off of the bat,” he said. “It’s probably a little bit of everything.”

In 2019, three pitchers — Jordan Hicks, Andres Munoz and Aroldis Chapman — have had pitches with an average pitch velocity over 100 mph. In 2015, only one pitcher was on the list — Chapman.

Hicks, who is out for the season after undergoing successful Tommy John surgery in June, also owns the 20 fastest pitches thrown this year, including four above 104 mph, according to Statcast.

Love and Michael Burns, a clinical lecturer in anesthesiology at the University of Michigan, are the authors of “Corked: Tales of Advantage in Competitive Sports”

Burns, who was also not part of the independent committee established by MLB, agrees with Love’s assessment of that a number of factors have contributed to the home run spike. “There is no doubt that baseballs have been altered over recent years,” he told Fox News, via email. “More aerodynamic, harder, and balls with even slightly more bounce can significantly alter how they respond to the bat and how they fly through the air after contact.”

“It is also likely that batters are more focused on hitting home runs and alter their approach at the plate to do so,” he added. “All home runs hit in the major league fall within a tight window for both exit velocity and trajectory (the MLB states this fact in their baseball investigation). With the surplus of advanced analytics involved in today's game, the tools are available for players to craft their swing for a variety of intentions.”

According to Statcast, the 2019 season has seen five players — Aaron Judge, Joey Gallo, Nelson Cruz, Derek Fisher and Brad Miller — have average exit velocities of over 95 mph, including 218 such instances from Cruz alone. In 2015, only one player, Giancarlo Stanton, averaged an exit velocity greater than 95 mph, occurring 158 times.

Gallo, whose career-high in HRs is 41, set in 2017, is also the only player over the past three seasons to consistently have an average launch angle of over 20 degrees.

Burns, like Love, feels that the current game of baseball has become less enjoyable. “Watching a 3-hour home run derby is not something I am interested in watching day in, day out,” he said. “There are several missed opportunities in promoting the more skilled aspects of the game and the players possessing those skills.”

HOW HIGH-TECH CHIPS ARE REVOLUTIONIZING THE NFL

“Focusing on home runs alone is like going to build a house and the only tool you bring is a hammer,” he added.

Union head Tony Clark, a former All-Star first baseman, recently said that some of his members have sent balls to the players' association office. Like Verlander, Clark has also questioned whether MLB has more input into the ball as a result of the organization’s stake in Rawlings.

Rawlings manufactures major league baseballs in Costa Rica, and then stores them in Washington, Missouri, at 70 degrees and 50 percent humidity. All teams store their balls at about 70 degrees, and Arizona and Colorado use humidors that maintain humidity at 50 percent.

Speaking to the Baseball Writers Association of America, Manfred dismissed the notion of baseball manipulation in the manufacturing process as “a great conspiracy theory.”

“How we manipulate a human-dominated, handmade manufacturing process in any consistent way is for a smarter human being than I,” he added.